A knowledgeable onetime editor of automobile reviews thought the 2020 Genesis G90 “looks like a Chrysler.”

That person shall remain nameless, having actually mentored a famous reviewer, who sadly is not among us any more but who learned the craft from the editor, now retired.

It can be viewed as a tribute to the infant Genesis brand, to be thought of in the same breath as some of the famed Chrysler and Imperial models of yore, which were right up there in prestige with Lincoln, Duesenberg and Cadillac in the homeland.

The Genesis G90 follows a modern trend in which popular automobiles have spun off their own luxury brands, taking the good will the manufacturers have developed from providing interesting, reliable and even exciting cars and developing new models to command higher prices and prestige.

Prominent in this concept are Japan’s Lexus, the luxury brand of Toyota, and Acura, gestated from Honda. In an earlier era, Ford begat Mercury and Lincoln, and now we have used-to-be humble Hyundai beguiling us with Genesis.

It’s just getting started. Originally introduced as the top-line Hyundai Equus from the South Korean manufacturer, the G90 became the pinnacle of a separate luxury brand in 2017. It is now on its way to becoming its own special entity with a lineup of premium sedans and upcoming crossover sport utility vehicles. Up first is the 2021 Genesis GV80 later this year.

For now, the G90 stands as the flagship, offering the performance, luxury orientation and reputation as established marques that include Mercedes-Benz, Lexus,  BMW, Jaguar, Acura, Audi, Cadillac, Lincoln and even Volvo — but with the South Korean basic principle of offering more bang for the bucks.

Sure, if keeping up with and exceeding the Joneses at snazzy cocktail  parties is your thing, prattling on about owning a Genesis G90 will not score as many conversational points as talking about your daily driver with the Mercedes three-pointed star or the leaping Jaguar on the hood.

The Genesis G90, as of now, doesn’t have that sort of panache. But if you’re in interested in a slick, smooth luxury car and you are without unlimited financial resources, you can substitute — in your psyche, at least — a G90 for that BMW 7-Series or Mercedes S-Class and pocket about 20 grand in savings.

The best part, except for the status that goes with the blue and white spinning propeller or the three-pointed star, is you won’t be short-changed from the feel behind the wheel. The G90 is as capable as any sedan in the large luxury class, with all the accouterments you might specify. 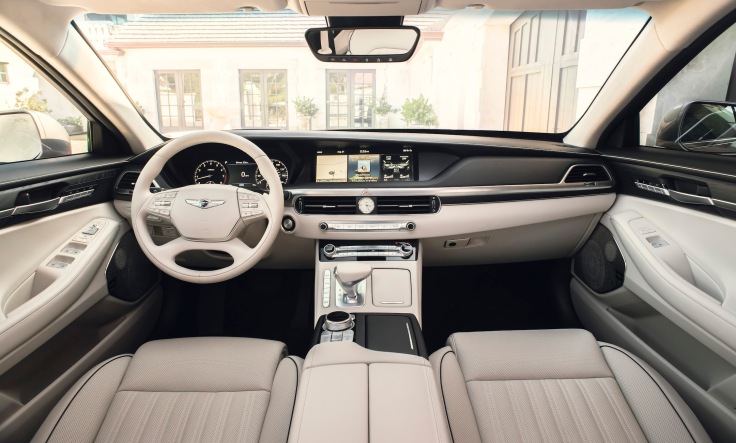 The tested Genesis G90 RWD 5.0 Ultimate four-door comes with a velvety 420-hp, 5.0-liter V8 engine that delivers 383 lb-ft of torque. The power gets to the rear wheels through an eight-speed automatic transmission. Also available is a turbocharged 3.3-liter V6 with 365 hp. All-wheel drive is an option with either engine.

The G90, with its imposing new grille, is an inch more than 17 feet long with 113 cubic feet of space for passengers and a trunk of 17 cubic feet. City/highway/combined fuel economy of 16/24/19 mpg is not outstanding but, hey, this is a luxury car, not a Chevy Spark.

With luxury cars, it’s about feedback and ambiance. The Genesis G90 communicates tactile sensations from the steering wheel that is characteristic of premium sedans. It’s also mausoleum silent in highway cruising, nearly as quiet as an electric, though there’s some muted growl under hard acceleration.

The ride is creamy but controlled and the handling on curving roads is competent and confidence inspiring. But don’t mistake the G90 for a sports sedan. Its forte is sedate motoring, even at extra-legal speeds.

The G90 Ultimate is set up for maximum comfort and serenity for four. Surroundings are done up with premium wood trim and soft, perforated leather seats with heating and cooling all around. In back, the outboard passengers get sun shades on the windows and power seat adjustments, along with infotainment screens mounted on the front seatbacks.

The center armrest in back houses climate and other controls, and can be tucked up to accommodate a fifth unfortunate passenger, who gets relegated to a hard, uncomfortable perch. There are seatbelts and headrests for three persons in back, as well as a pass-through into the trunk for skis or other long objects.

The suggested price for the G90 Ultimate came to $76,695, not for everybody — but in this snooty class it’s a bargain. 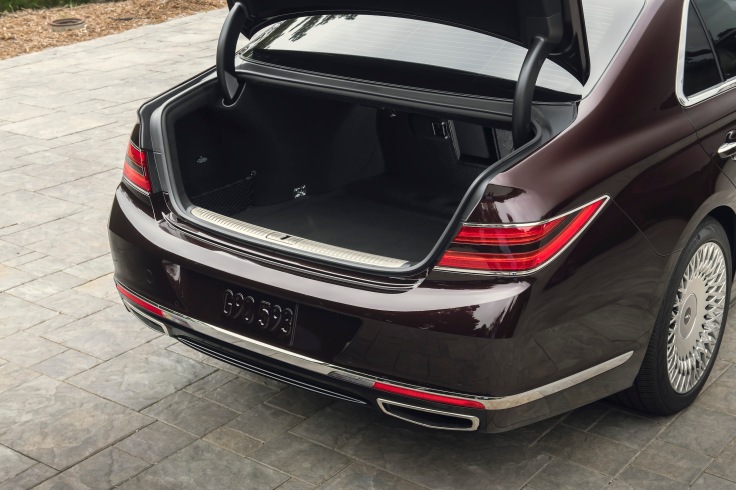 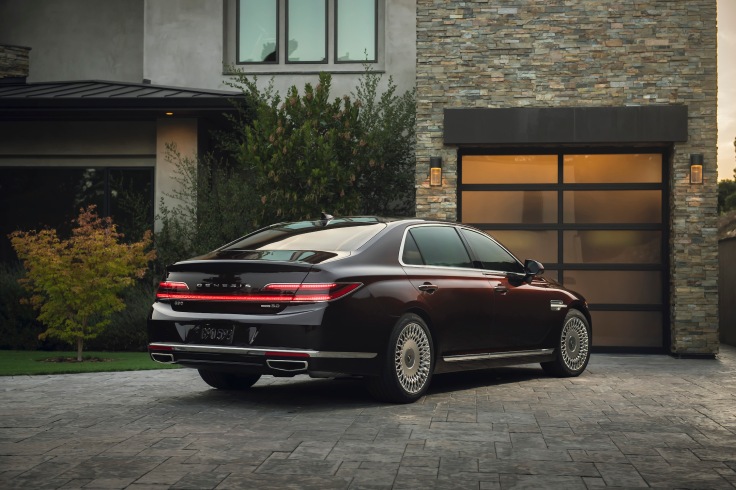