The leaders at Volkswagen weren’t kidding when they tacked the “Sport” designation on the 2020 Atlas Cross Sport 2.0 SE.

Sure, it likely was dreamed up to boost sales of the company’s new midsize crossover sport utility vehicle. Throughout automotive history, the marketing gurus have worked to manipulate buyers’ brains into automatically applying certain attributes to their vehicles.

Mostly, the appellations denote actual performance. But sometimes they are simply slapped on in the middle of a model run to boost the inevitable lagging sales.

That’s not the case with the Atlas. It started out as a full-size, three row crossover sport utility vehicle that, for some families, could substitute for a minivan, though it is somewhat short on cargo space.

Now Volkswagen has expanded the Atlas horizons with the Sport, which has an entirely different character from its three-row sibling and lives up to its “sport” designation.

It’s a midsize crossover SUV with 112 cubic feet of space for passengers in the first and second rows, with a generous cargo space of 40 cubic feet. Fold the seatbacks flat and the cargo area expands to 78 cubic feet, plenty to haul all the stuff for your kid’s freshman year in college.

You’d think that would satisfy a lot of customers. But VW also has infused this bulky crossover with performance bones. Though it is 16 feet 4 inches long, 5 feet 8 inches tall and weighs 4,228 pounds, it validates the old canard about “German feel” with responsive handling and a ride that won’t produce fatigue on a long trip. 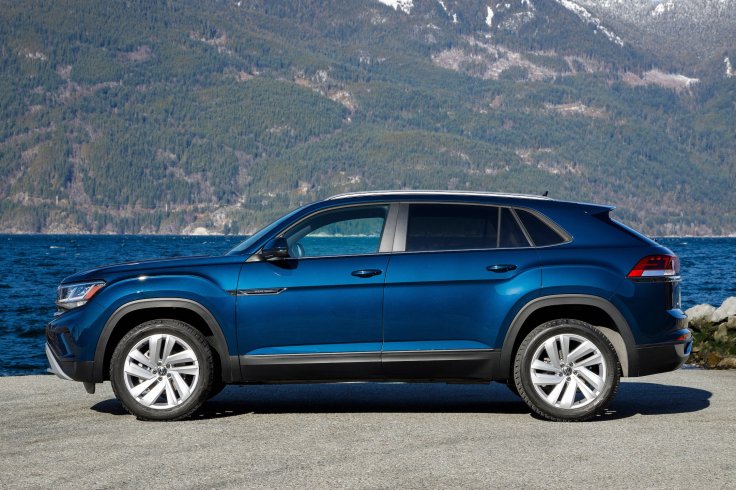 Belying its size, it attacks twisting roads with some of the aplomb of a sports sedan: capable 4Motion all-wheel drive and communicative steering with good feedback. Of course it’s no match for a Bullitt Mustang or a Mazda MX-5 Miata but it can hold its own with a host of other vehicles.

Power comes from a 2.0-liter four-cylinder engine with 235 hp and 258 lb-ft of torque, delivered through an eight-speed automatic transmission. City/highway/combined fuel economy of 18/23/20 mpg is not outstanding but that’s the tradeoff for the performance.

The engine is turbocharged but you’d be hard-pressed to notice. There’s almost no turbo lag, although there is a hesitation if you use the idle stop-start system, which shuts down the engine at stoplights and then cranks it up when you take your foot off the brake. Fortunately, you can disable the stop-start with the touch of a button, as was the script for this review.

There also are driver selectable settings for different on- and off-road drive modes: Normal and snow, as well as off-road and off-road custom. Hill descent control is included for challenging boondocks courses.

There’s no manual-shift mode for the automatic transmission — thus no steering-wheel paddle shifters — but it’s not needed. You can easily select “sport” instead of “drive” with the console mounted shifter and rocket off  with instant snap-shifts in the stoplight drag races simply by keeping your foot to the floor.

On the road, the Atlas Sport is mostly a quiet cruiser with enough engine drone to alert you to the power under the hood. The only time it gets annoying is when you hit the “max” button on the air conditioning. Then the engine and blower sounds become a racket that overpowers even loud audio.

But the price was reasonable, slightly more than  the average of a new car in this era. The base was $38,865, including the destination charge and, with an option of a special Aurora Red metallic paint job,  the bottom line sticker came to $39,495. It’s a decent hunk of a crossover for the money.