The big buzz word among manufacturers almost everywhere is “electrification,” but it doesn’t mean pure electric vehicles. As often as not, it refers to hybrid gasoline-electric cars like the 2020 Hyundai Ioniq.

The Ioniq, however, does have the advantage of being available not only with a hybrid power train but as a plug-in hybrid and a 100% electric. Honda does something similar with its Clarity, which comes as an electric, a plug-in hybrid and as a fuel cell model that uses on-board manufactured hydrogen fuel to generate electricity.

The strategies vary. But from a consumer standpoint, the basic hybrid still makes the most economic and convenience sense, as exemplified by the Toyota Prius, the most successful electrified vehicle in history. Although it now also offers a plug-in model, Prius hybrid sales since it started 20 years ago now total more than 2.3 million in the U.S.

Unlike hybrids, full electric vehicles still come with built-in “range anxiety,” meaning an owner must calculate a trip that includes locations and time to recharge the batteries.

Like pure electrics, plug-in hybrids are more expensive than standard hybrids, though their limited range on electric power — as little as 10 miles on some luxury plug-ins and 29 miles on the Ionic plug-in — is not a concern because they revert to regular hybrid gasoline operation as soon as the batteries run out of juice.

For 2020, Hyundai has redesigned the Ioniq with attractive fresh styling inside and out. It is still the same size and configuration, with similar power, as when it first was introduced as a 2017 model.

It’s a four-door hatchback sedan that is marketed as a compact but which qualifies as a large car as defined by the Environmental Protection Agency. It has 96 cubic feet of space for five passengers, though the center-rear individual gets squished, and 27 cubic feet for cargo under the rear hatch. The total of 123 cubic feet of interior volume beats the EPA’s definition of full-size as more than 120.

From the get-go three years ago, the Ioniq hybrid came across in all of its versions as a competent performer, easy-going in urban traffic or long-distance freeway driving. The transition back and forth from electric to hybrid motoring is so seamless a newbie might not realize that it’s a hybrid.

For 2020, the power train has not changed. It consists of a 1.6-liter four-cylinder gasoline engine paired with a 32 kilowatt electric motor, which together make 139 hp and deliver city/highway/combined fuel economy of 55/54/55 mpg on the tested Limited model. (The basic Blue model gets 58 combined).

On the road, the Limited delivered a taut feel with well-weighted steering and a quiet interior with little wind noise. The only unavoidable intrusion was tire noise from unruly highway surfaces. The front seats, though a bit flat on the bottom, nevertheless were supportive and comfortable. 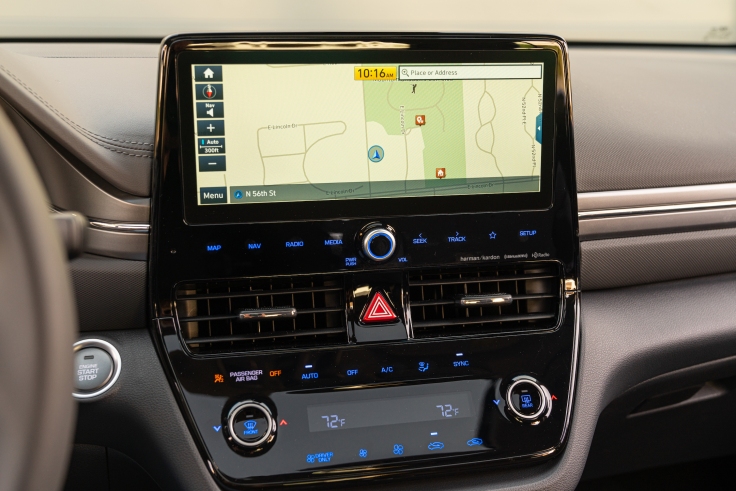 With 27 cubic feet of space in the cargo area under the rear hatch, the Ioniq hybrid can do double duty as a compact crossover sport utility vehicle. The rear seatbacks fold to expand the load-carrying capability. However, there is no spare wheel under the cargo floor. An emergency tire-puncture repair kit substitutes — okay for leaks but useless in a blowout.

In that case, you use Hyundai’s Blue Link to call for roadside service. The system works with smart phones and smart watches as well as Google assistant and Amazon Alexa to perform a multitude of tasks. Among them: remote starting with climate control, finding destinations and locating your vehicle.

The Ioniq Limited hybrid has you covered.