It’s still a puzzle why any luxury manufacturer would produce a vehicle like the 2021 Mercedes-AMG GLE 53 Coupe.

It must have something to do with the psyche of some of its customers — people who maybe have the same mindset of those who rushed out to buy the BMW X6 after it was introduced in 2008.

To some, it looked ridiculous. Take a tall midsize luxury sport utility vehicle, with all its attendant practicality, and shave the roof so at least the part above the beltline vaguely resembles a sleek fastback like an Audi A7.

Never mind that the effect is that of a clumsy effort to produce a stylish SUV with limited rear headroom and visibility, as well as truncated cargo space. Or, as a Car and Driver magazine critic wrote, it “proves that some people really do want a running shoe with a hiking sole attached.” 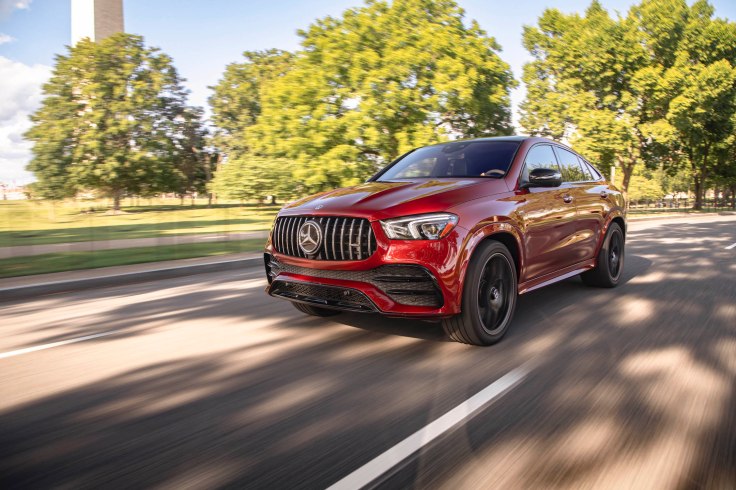 Mercedes gives ‘em the Old Razzle Dazzle by describing its new AMG GLE 53 as a four-door Coupe. It’s even part of the official name. The company has produced other so-called coupes with four doors but some are tempting designs with sensuous fastback styling—what was called a torpedo body in the World War II era.

Except for the odd body and nosebleed price, the AMG GLE 53 Coupe has solid Mercedes-Benz credentials, enhanced by the company’s high-performance AMG arm. It is a mild hybrid with a 48-volt electric supercharger that contributes 21 hp to get things going without discernible turbo lag, connected to a 429 hp, 3.0-liter turbocharged inline six-cylinder engine that makes 384 lb-ft of torque.

It could hardly have less given its high performance image and curb weight of 5,250 lbs. Mercedes-Benz says that the AMG GLE 53 can nail 60 mph in about five seconds, assisted by the mild hybrid system off the line, which also enables a sophisticated idle stop system that barely makes itself felt. Top speed is governed at 155 mph.

The transmission is a nine-speed automatic with a manual-shift mode controlled by paddles on the steering wheel. Mercedes 4Matic all-wheel drive and an AMG Ride Control air suspension system are part of the standard equipment.

There are seven selectable drive modes for on- and off-road motoring: Sand, Trail, Slippery, Individual, Comfort, Sport and Sport Plus. The last is intended only for race track duty, and the onboard computer informs the driver whether there are any race tracks — or none at all — in the neighborhood.

The AMG GLE 53 Coupe is an easy driver, obviously with plenty of power, though it is almost six feet tall and has the substantial, even somewhat ponderous, feel of a big vehicle, though the heavy steering and handling feel secure on twisting roads. Because of the bias toward handling, the ride is a bit stiff.

Despite the off-road equipment, this is more of a confortable road runner suited to long-distance travel on Interstate highways. It is uncommonly well dressed, and the price tag bears witness to the long list of standard and optional equipment and features.

The starting price of $77,495, including the destination charge, looks almost reasonable. But the tested Coupe also came with a whopping $27,829 worth of options — an amount that could buy you a nice compact crossover SUV.

The equipment is too extensive to fully list here, but includes a suite of safety features enhanced by one of the biggest head-up displays anywhere, along with Distronic adaptive cruise control, emergency braking, heated and ventilated seats, four-zone automatic climate control, navigation, Burmaster surround-sound audio, SXM satellite radio, and Apple CarPlay and Android Auto. A particular favorite for this review was the massage function built into the driver’s seat. Relaxing.

There’s a bewildering array of buttons, switches and icons on the  console, steering wheel and center screen, some of them redundant. They can be learned but it takes time and practice to get everything set up properly. Don’t fiddle with them while driving.

The AMG GLE 53 Coupe does come up short in a few areas. There are no assist handles inside for entering and exiting. Visibility to the rear is limited, with wide pillars flanking a small rear window that resembles a machine gun port in a military bunker. And the sunshade for the glass sunroof is made of a perforated cloth that admits too much light and heat. 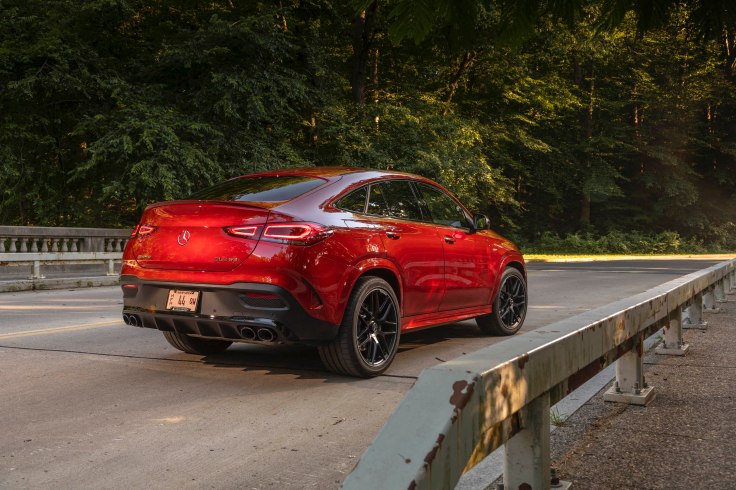