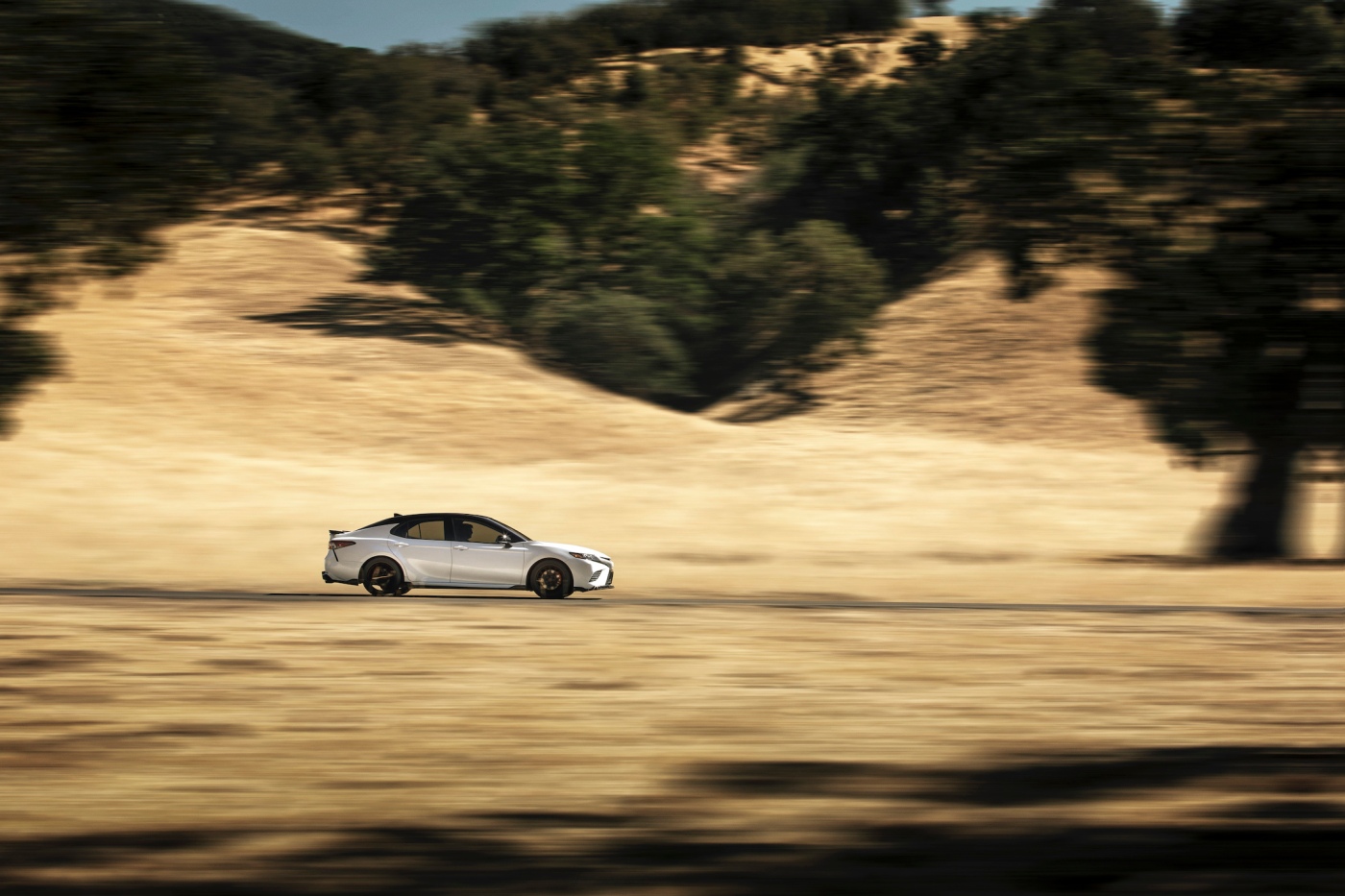 Though the sport oriented 2020 Toyota Camry TRD is distinct from its more expensive Avalon TRD sibling, you could argue that the two sedans actually are fraternal twins.

Both have been massaged by the Toyota Racing Development team, hence the TRD designation. Though the Avalon is marketed as a large car and as Toyota’s flagship, it is classified by the Environmental Protection Agency as a midsize car and is almost the same size as the Camry.

The Camry is 16 feet 3 inches long with 99 cubic feet of space for passengers and 15 cubic feet of trunk volume. The Avalon is an inch longer, at 16 feet 4 inches, with 103 cubic feet of passenger space and a trunk of 16 cubic feet.

The two cars also use the same engine and transmission combination: a 3.5-liter V6 that makes 301 hp and 267 lb-ft of torque, or twisting force, mated to an eight-speed automatic transmission controlled by paddle shifters mounted on the steering wheel. They have the same city/highway/combined fuel economy rating of 22/31/25 mpg.

Both have received extensive TRD modifications to their body structures, suspension, exhaust systems and brakes to heighten the driving experience with better handling and a more sporting feel.

The big difference is that the Avalon is more luxurious with a higher level of equipment — and therefore is more expensive — than its Camry counterpart. An Avalon TRD reviewed recently for this column came with a base price of $43,255 and a tested price of $45,410.

All of that reported for driving duty during testing. Though there was no opportunity to compare the TRD with every other Camry that ever existed, the overall impression strongly suggests that this is best-handling Camry ever. Acceleration is swift and braking is superb, though the ride necessarily is taut because of the stiffened body structure and suspension system. Off the line, the Camry TRD can effortlessly nail 60 mph in a bit more than five seconds, according to independent tests.

Though not needed except for looks, the Camry TRD is distinguished by a trunk mounted spoiler that comes as part of a $500 appearance package. Other embellishments: brake calipers painted red and a prominent gloss black grille, along with exterior trim and interior TRD items that include red seatbelts and stitching, and striped cloth inserts for the leatherette trimmed seats. 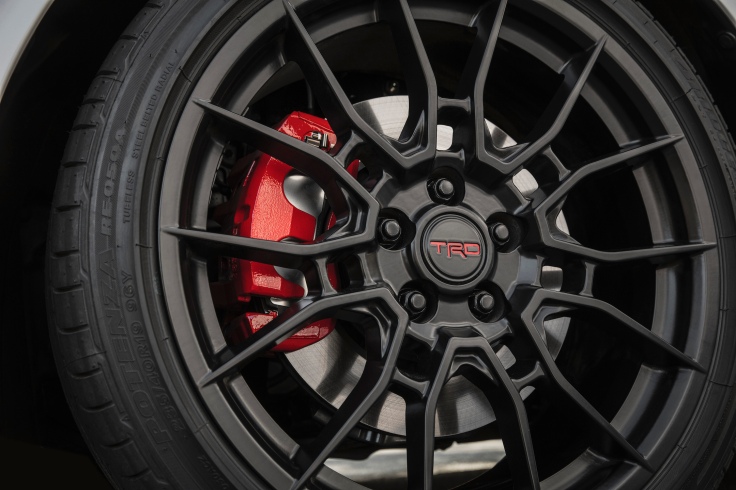 One serious shortcoming: reading the instruments. The Camry TRD’s speedometer, odometer and other gauges were done up with pale red numbers and other indicators on a black background. There was backlighting but it was so dim that it was difficult for even a driver with 20-20 eyesight to read the speedometer, and impossible in bright sunlight. There was no way to adjust the daytime lighting intensity though the gauges were more visible at night. 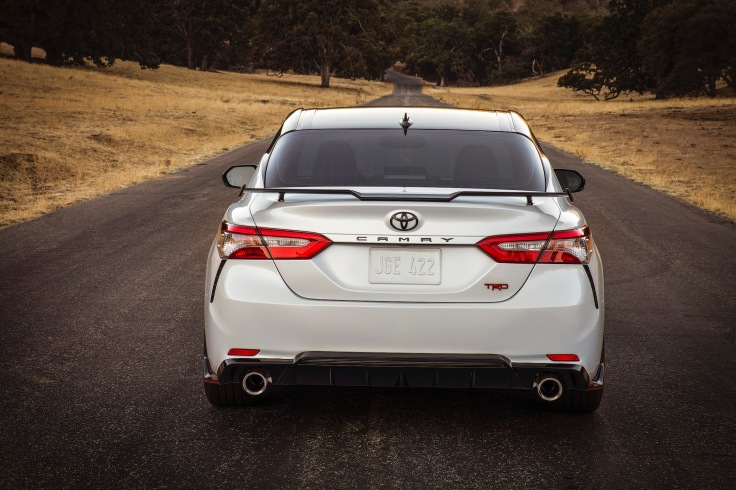 Toyota’s Camry has been the nation’s best-selling midsize sedan for nearly two decades, although like other four-doors it has been losing ground as buyers flock to crossover sport utility vehicles like Toyota’s own RAV4 and Highlander.

That’s certainly part of the reason for the 2020 Camry TRD. Manufacturers often deliver special models of existing cars during their brief generations to spark buyer enthusiasm. The Camry TRD comes across as one of those. At its relatively modest price, it delivers an embraceable driving experience along with family car practicality and Toyota’s reputation for reliability and durability.

Now, if Toyota would just brighten the speedometer for better readability. 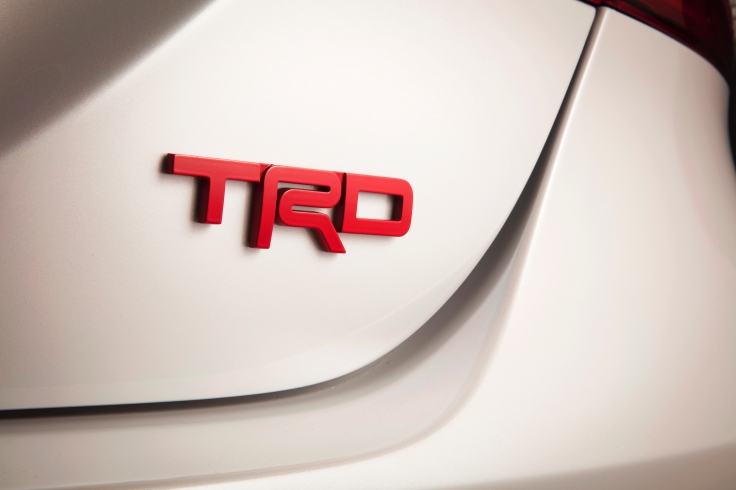