Though not faring badly in the crossover sport utility wars, the 2020 Ford Escape enhances its chances with new weapons that include two hybrid versions — one standard and the other a plug-in.

In 2019, the compact Escape, a Ford mainstay since the 2001 model year, settled into fourth place among compact crossovers behind the best-selling Toyota RAV4, the second-place Honda CR-V and the third place Chevrolet Equinox. Escape sales bested those of the other prominent competitors: Jeep Cherokee, Mazda CX-5, Hyundai Tucson, Volkswagen Tiguan, GMC Terrain and Kia Sportage.

Ford, using a hybrid system similar to that of the best-selling Toyota Prius, was the first to introduce the fuel-saving technology into a crossover in 2005, then let it slide away.

Now it returns with the two hybrids. Front-drive Escape models are available as standard hybrids and plug-ins. The company says the latter can travel up to 30 miles on electric power alone. It has a city/highway/combined fuel consumption rating of 44/37/41 mpg.

If you order the Escape with all-wheel drive, the plug-is not available. But its standard hybrid power train, with a stingy 2.5-liter four-cylinder engine combined with an electric motor integrated into the transmission, delivers a combined 200 hp. The EPA fuel economy rating is 43/37/40 mpg, enough to give it an estimated range of 568 miles.

The all-wheel drive Titanium model, tested here, came to the market before the plug-in. Though expensive for a vehicle in this category, it exhibits characteristics that rival some near-luxury and luxury crossovers.

It has classy exterior styling, borrowing cues from the Ford Mustang, the new electric Mustang Mach-E and Ford’s GT super car. The last has a price tag of nearly half a million dollars. Elements transfer to the Escape, which presents clean, fuss-free lines.

Inside, the driver and passengers are cosseted in soft leather seats, surrounded by trim, materials and workmanship that would not be out of place in a Lincoln or Cadillac. No surprise, then, that the tested Titanium trim had a $35,995 price including the destination charge and, with options, topped out at $37,990. As an American Motors executive said years ago, “Americans want fuel economy, and they’ll pay anything to get it.”

It could be argued that this Ford Escape represents the epitome of what U.S. buyers currently are seeking in a compact crossover SUV. At 15 feet 1 inch in length and passenger space of 104 cubic feet with 35 cubic feet for cargo behind the second row, it exceeds the EPA’s definition of a large sedan like the Bentley Flying Spur.

Of course, it comes up short of the Lincoln Aviator from Ford’s luxury division, a three-row crossover that has 150 cubic feet of passenger space and 18 cubic feet for cargo, or 42 cubic feet if you fold the third row, which cuts the passenger room to 126. 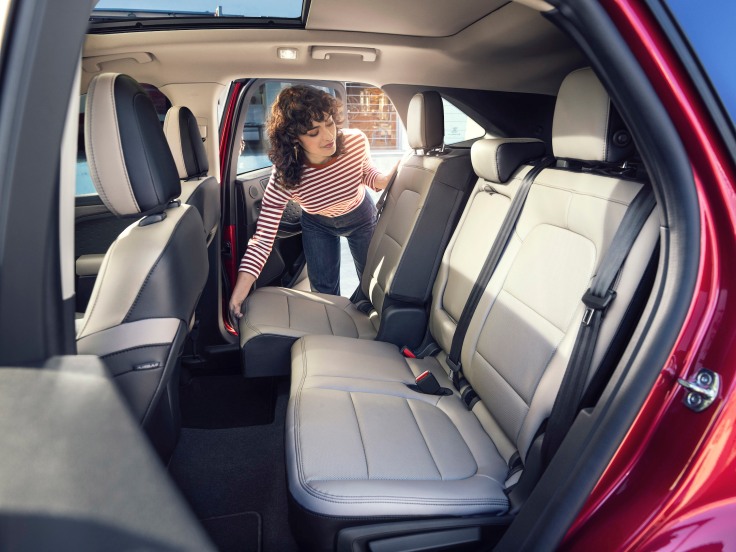 Nevertheless, the Escape can carry up to five passengers and most of their stuff on a beach or ski vacation, assuming the snowboards and skis are tied down somewhere on the roof.

As with most modern hybrids, the only clue that this is not a standard gasoline-engine vehicle is the silence that results when you punch the start button. It simply announces that everything is “ready.” Then you drive it as you would any automobile.

Except for some tiny lag off the line, the Escape accelerates smartly and holds its own in any stoplight sprint or freeway on-ramp. There’s no hint of a transition between electric and gasoline power; they simply work in concert. Plus as a conventional hybrid, you never have to plug it in.

To help boost the fuel economy, the hybrid Escape boasts four hybrid settings: Auto EV, in which the onboard computer decides the mix of gasoline and electric power; EV Now, which delivers all-electric driving; EV Later, which switches to full gasoline-fueled driving to conserve electric power for later use, and an all-new EV Charge mode in which the battery charges continually for eventual use.

All Escape models, including the hybrids, also are equipped with five driver-selectable settings that adjust transmission shifting and other  functions to enhance fuel economy and performance under different conditions. They are labeled Normal, Eco, Sport, Slippery and Snow/Sand driving.

And, by the way for duffers, Ford brags that the Escape can carry a foursome and their golf bags. 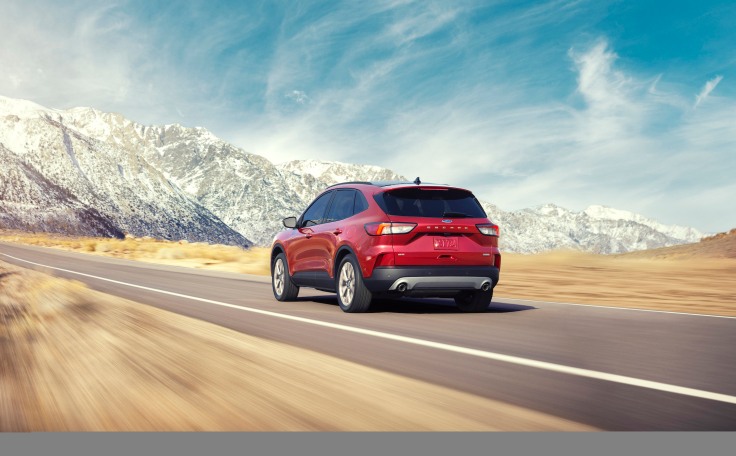