With substantial numbers of electric cars still on the far horizon, the dominant trend in the industry is toward gasoline-electric hybrids, including semi-sporting vehicles like the 2019 MINI Cooper SE Countryman ALL4 PHEV.

That’s a mouthful but no surprise because Britain’s MINI is owned by BMW, the Bavarian Motor Works, which has a habit of naming its vehicles with what look like technical job descriptions. An extreme example was the 2016BMW Individual M760i xDrive Model V12 Excellence THE NEXT 100 YEARS.

On the MINI, the ALL4 designates all-wheel drive, Countryman the model, SE the trim level and PHEV stands for plug-in hybrid electric vehicle.

Nomenclature aside, the Countryman PHEV qualifies as a crossover sport utility vehicle, built like a car with a unibody.  It is fairly large for a MINI, stretching nearly 16 feet long and weighing almost two tons.

With 94 cubic feet of space for passengers and a cargo area of 17 cubic feet, it has as much interior space as a midsize car. But it also fits the government’s classification of a small station wagon.

It uses a 134-hp 1.5-liter three-cylinder engine to drive the front wheels and an 87-hp electric motor to drive the rear wheels. Together, the system makes 221 hp and 284 lb-ft of torque.

The power gets to the pavement through a six-speed automatic transmission for the front wheels and a one-speed direct drive for the rear wheels.

City/highway/combined fuel consumption in gasoline-only mode is rated by the Environmental Protection Agency at 27/28/27 mpg. In hybrid operation, the mpg equivalent works out to 65 MPGe. As a plug-in, it can travel a maximum of 12 miles purely on electric power, but it takes a feather foot on the throttle.

With its BMW and British heritage, the MINI delivers good performance and handling but with some English eccentricities. It can nip off zero-to-60 mph stoplight sprints in about six seconds. But road noise intruded on some less than ideal surfaces.

Handling, especially in the Sport driving mode, is precise with the front wheels obedient to the driver’s steering wheel inputs. With the suspension system biased toward handling, the ride tends toward stiff rather than cushy. However, the John Cooper Works (JCW) sport seats, upholstered in “carbon black Dinamica/cloth,” are supportive and comfortable with solid bolstering for spirited driving in the twisties. They also are heated; a redundancy with cloth. 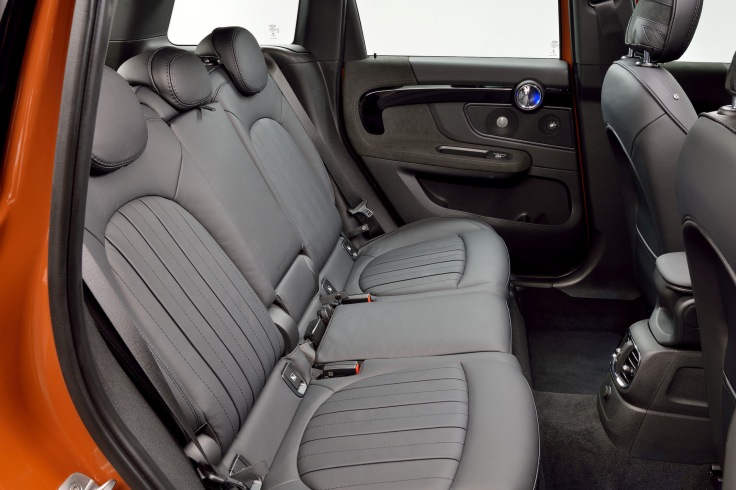 The Countryman PHEV also came with a BMW-like base price of $37,750, including the destination charge. With options that included PHEV Sport and Special Edition packages, touchscreen navigation package and John Cooper Works appearance package, the bottom-line sticker price came to $45,750.

A glance at the instruments shows a group of circular gauges, including the center touchscreen. The design harks back to the mid-20thcentury, when MINIs came with a giant center-mounted speedometer.

There was no missing the tested MINI on the road. It had a classy charcoal paint job, with outside mirrors and badges done up a sort of chartreuse color.

Two outboard passengers in back get plenty of head and knee room. But the center-rear passenger gets disrespected by a large floor hump, narrow and hard cushion, and intrusion from the center console. The power tailgate, part of the PHEV Sport package, provided access to the cargo area.

The MINI came with an odd mix of equipment. It included a navigation system, automatic climate control, wireless smart phone charging and Apple CarPlay but FM radio without SXM satellite radio. An AM band could not be found. There also were no power seats. The seats up front had six-way manual adjustments.

Moreover, the sun visors did not slide on their support rods to adequately block sun from the side. And the sunshade for the panoramic sunroof was made of a perforated cheesecloth-like material that admitted too much sunlight. Sunshades should be opaque. 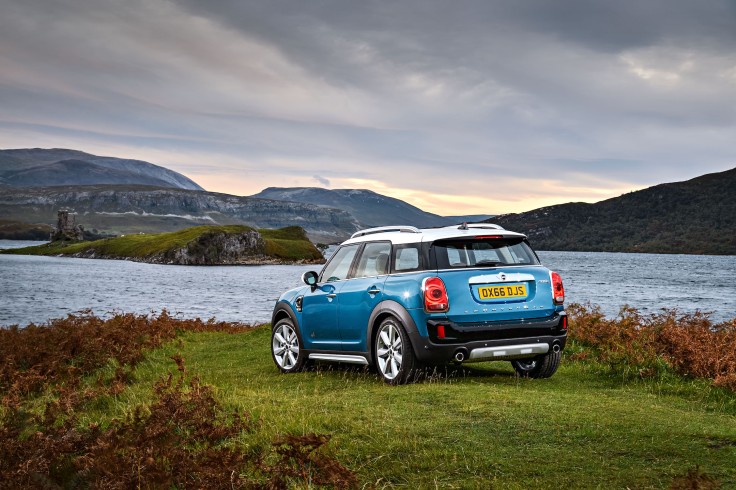