The Forte was not suffering. But Kia nevertheless injected it with juice from the Stinger — though not the venom.

Since its introduction nearly a decade ago, the Forte has been a success story for South Korea’s Kia. Steady annual sales peaked in 2017 at 117,596, making it the brand’s top seller. They continued strong in 2018.

Not content to simply cruise, the company redesigned the Forte to resemble the Stinger, its critically acclaimed high-performance midsize fastback. They reimagined the styling, giving the new Forte a long hood, short rear deck and other design cues of the Stinger.

However, the Stinger is equipped with a practical hatchback, popular in Europe and other places, while the new Forte, at least initially, comes only as a four-door sedan with a traditional trunk, albeit of a size, 15.3 cubic feet, that would do justice to a midsize car.

The Forte itself, though marketed as a compact, perches on the cusp between compact and midsize, As defined by the federal government, size classes are determined by interior volume—a combination of passenger and cargo space. 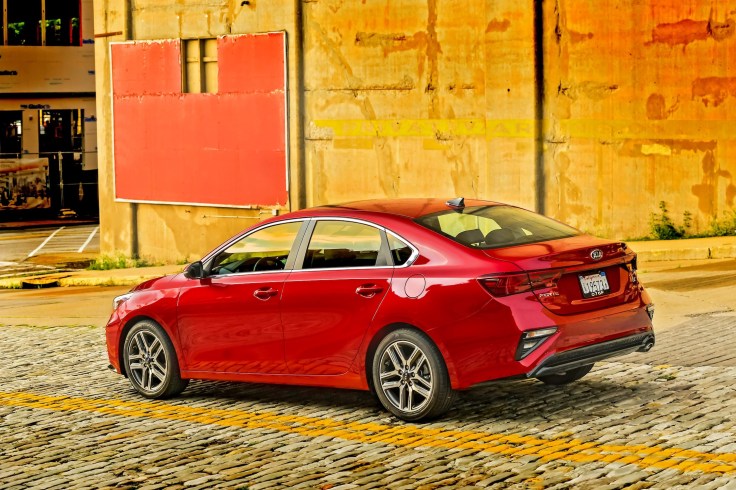 With a motorized sunroof, the new Forte has an interior of slightly less than 109 cubic feet, classified as a compact. Without the sunroof, the space is a bit over 111 cubic feet, which gives it a midsize designation. The dividing line is 110 cubic feet.

It also has an economy car orientation, although in the Korean tradition it comes well equipped even in the lower trim levels. There are four: FE, which starts at $18,585, followed by the LXS, S and EX. Only the base FE comes with a choice of a six-speed manual gearbox or Kia’s new continuously variable automatic transmission (CVT). All others get the automatic.

The transmission, which Kia calls an IVT, for Intelligent Variable Transmission, varies the power with a belt and pulleys so there are no shift points. It is the company’s first of its type built in-house and it was engineered to subdue common complaints about CVTs — that they are noisy and feel as if the transmission is slipping.

Kia’s IVT uses a chain-type belt and special sound deadening materials around the transmission housing. It also can be switched to a different mode that mimics the shift points of a conventional automatic transmission.

But the IVT goes about its business so unobtrusively, getting the power to the front wheels efficiently, a driver is unlikely to give it a second thought. The Forte is powered by a 147-hp, 2.0-liter four-cylinder engine with 132 lb-ft of torque.

The combination is more than adequate for most driving conditions in urban settings or on freeways. But as noted earlier it does not have much venom. On long upgrades, it feels as if it is straining to maintain speed.

It is likely that Kia will eventually offer more powerful versions of the Forte, perhaps similar to the current 2018 Forte5, a four-door hatchback of conventional design that comes with a 201-hp, 2.0-liter turbocharged four-cylinder engine with either a six-speed automatic transmission or a six-speed manual gearbox. 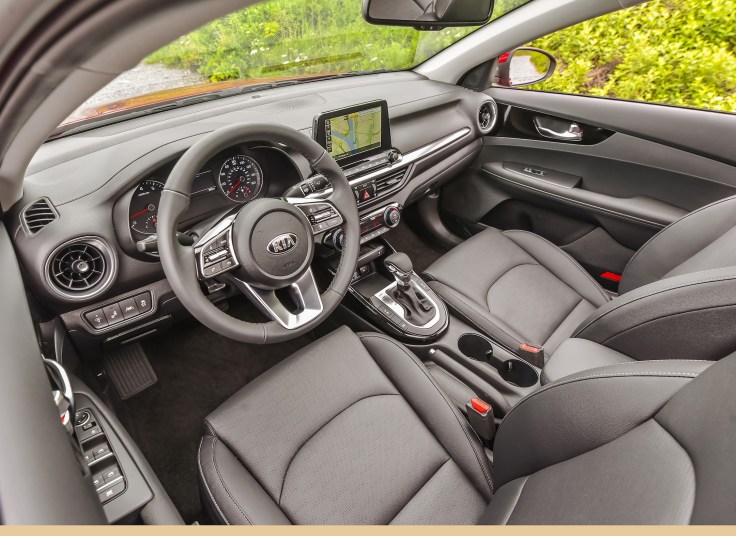 Even with the modest power on the 2019 sedans, the Forte presents itself as a well-executed value package that could easily satisfy many younger families.

The EX is priced at $22,885. With the Launch Edition package, the sticker comes to $26,095, which means that a customer could buy two Forte EX Launch Editions for about the same price as the top-line Kia Stinger GT with all-wheel drive. With the family resemblance, you could maybe tack on a Stinger badge and fool your friends.

Even better from a savings standpoint would be to order the S trim level with the $1,200 Premium package, which includes the sunroof and LED projection headlights with high-beam assist. It does not include navigation or pushbutton starting but it has quality cloth upholstery instead of the Sofino leather-like trim of the EX. The price is $22,285. 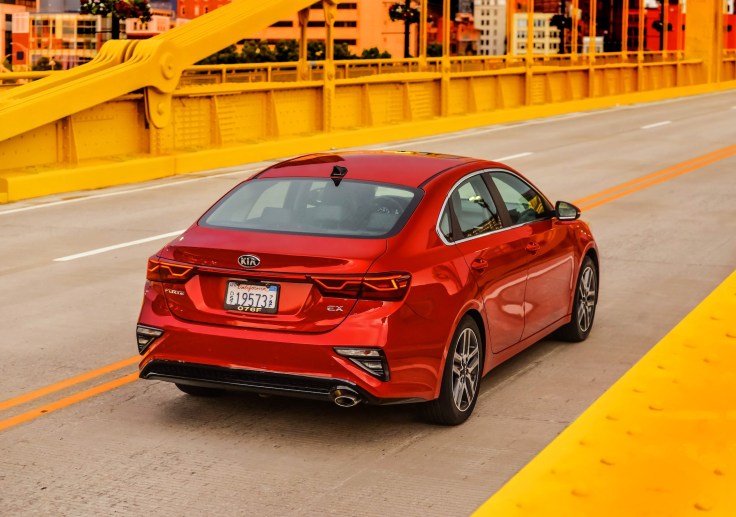