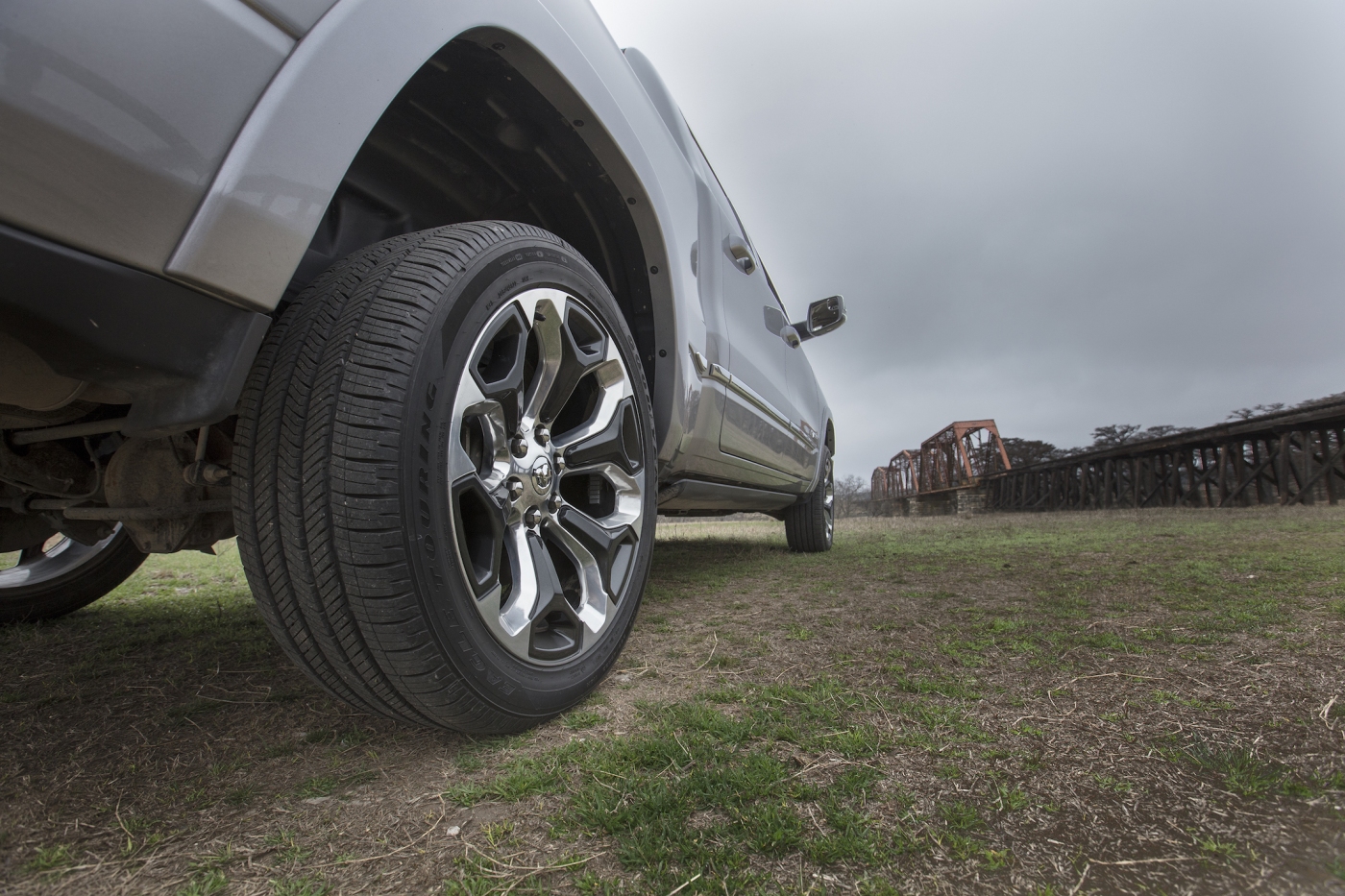 With a brand-new full-size pickup truck loaded with desirable features as the newly designed 2019 Ram 1500, the standout differences are distilled from increments and embellishments.

Big pickups have been getting better — and more popular — for at least a decade. For the Ram, the climb started in 2009 when it became a stand-alone brand after many years as the Dodge Ram. 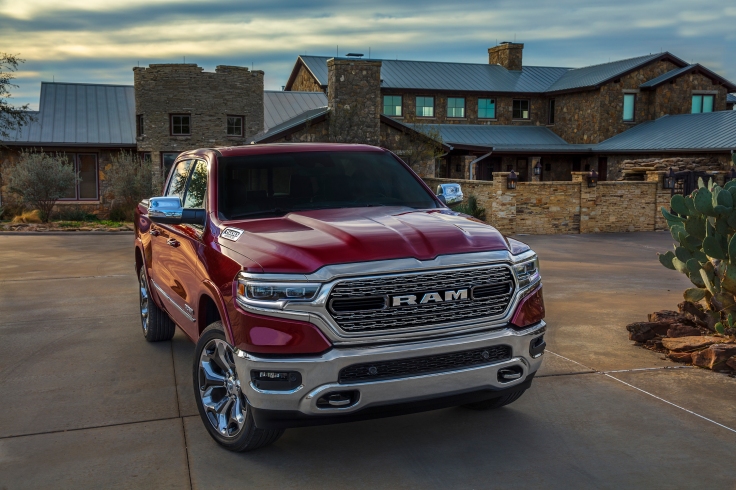 One big factor in the Ram brand’s success was an embellishment — its adoption of styling that mimicked that of the tractors of the 18-wheelers that ply the nation’s highways.

Now, it could be argued that the 2019 Ram has fully matured, oozing with safety, convenience, comfort and entertainment embellishments that should make it shine during what promises to be a year of cutthroat competition, especially against perennial sales leader Ford, and Chevrolet, which has a new Silverado coming.

Pickup truck buyers are notoriously brand loyal. It’s rare for a Ford guy or gal to switch to a Chevrolet or GMC, or a Chevy customer to bail in favor of a Toyota Tundra or Nissan Titan. This new Ram, however, has the stuff to turn customers’ heads.

Though there will be many versions of the Ram 1500 from six models with a starting price of $33,340 for the base Tradesman, the version tested for this review at the national introduction in Scottsdale, Arizona, was the top-of-the-line Limited Crew Cab four-door with optional four-wheel drive.

It was powered by Fiat Chrysler’s venerable 5.7-liter Hemi V8 engine with 395 hp and 410 lb-ft of torque. Power gets to the four corners through a new eight-speed automatic transmission. A dial on the dash enables the driver to choose rear-wheel drive or automatic all-wheel drive for highway duty, or locked four-wheel drive in high and low ranges for off-road adventures. 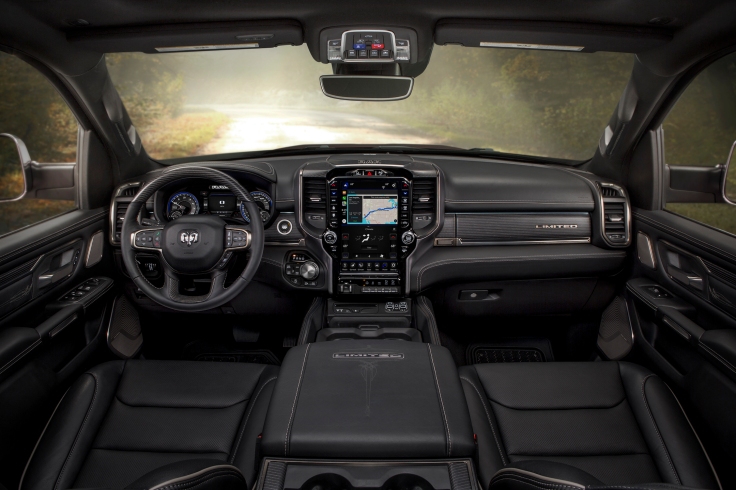 Other versions are in the works for later introduction, including V6 and V8 engines with a mild hybrid eTorque <sic> system that combines a motor generator with a 48-volt battery to enable stop-start for fuel economy. With rear-drive, the Ram has a city/highway/combined rating of 15/22/17 mpg.

Equipped as well as some luxury cars, the Limited had a base price of $60,630. With other options, including air suspension, panoramic sunroof and 22-inch aluminum alloy wheels, the sticker price came to $63,520 — also in luxury-car territory.

Except for its sheer size and weight — common now with full-size pickups — the new Ram can easily please anyone accustomed to luxury transportation. It is uncommonly quiet on the highway, with little intrusion of road, mechanical or wind noise.

Contributing to the hushed ambiance are clever engineering devices called active tuned mass modules (ATMM). Mounted on the side frame rails — which by the way are now 98% made of high-strength steel for rigidity and durability — the modules cancel out even miniscule vibrations when the Hemi engine switches automatically on the highway from eight- to four-cylinder operation for fuel economy.

Though you can’t toss it around like a sedan, the Ram drives smaller than its near 20-feet length and 2.5-ton weight would indicate. The steering is responsive and accurate, and the empty ride, abetted by the optional air suspension, frequency response shock absorbers and supportive seats, was comfortable for a big pickup.

The Ram’s designers stretched the cab by four inches, most of which went into the back-seat area, where three people can sit with plenty of head and knee room thanks to a flat floor. An enjoyable bonus: the Ram now has a rear seatback, split two-thirds and one-third, that reclines for long-distance comfort. There’s also 5.3 cubic feet of storage space in the cabin.

The tester came with FCA’s UConnect infotainment system with a 12-inch vertical screen that displays navigation and other functions, including an overhead surround-view camera that facilitates hooking up a trailer. Android Auto and Apple Car Play also are included, along with upgraded SXM satellite radio, 4G WiFi hotspot and what Ram claims is the most powerful Harman-Kardon audio system ever available in a pickup. 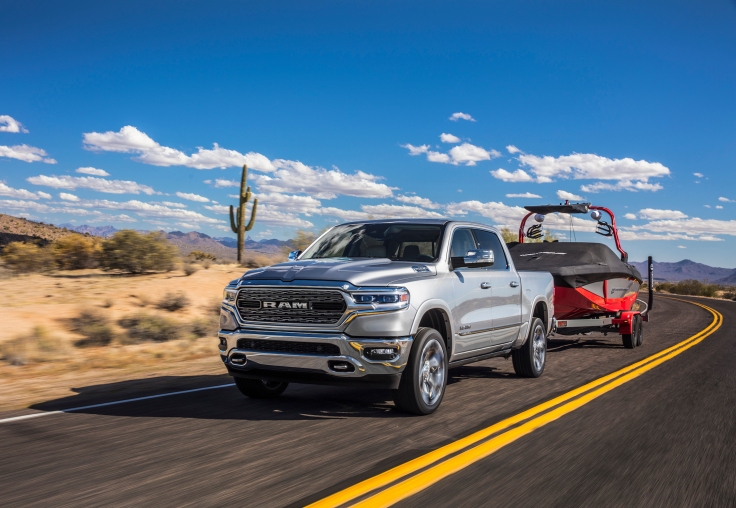