A few manufacturers introduced new compact crossovers, which have taken over as the hottest category in U.S. sales—mainly at the expense of midsize and compact sedans. But they were few and overshadowed by three four-doors. 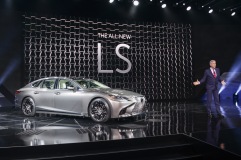 They are the all-new 2018 Toyota Camry, the 2018 Lexus LS500 from Toyota’s luxury division and the 2018 Kia Stinger, a new midsize sports sedan that looks as if it could threaten some of Europe’s best. 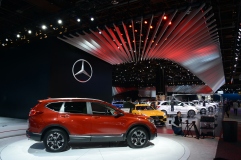 On the small crossover front, Nissan unveiled the new Rogue Sport, a smaller version of its compact SUV. It is based on the Nissan Qashqui, which is sold in other world markets. Mercedes-Benz introduced an all-new GLA and Chevrolet presented its redesigned Equinox, a compact crossover that tilts toward midsize.

But that was about it unless you count the new Chevrolet Traverse, a full-size, three-row crossover, the stretched Volkswagen Tiguan—also with three rows—and the smaller performance-oriented Audi SQ5. 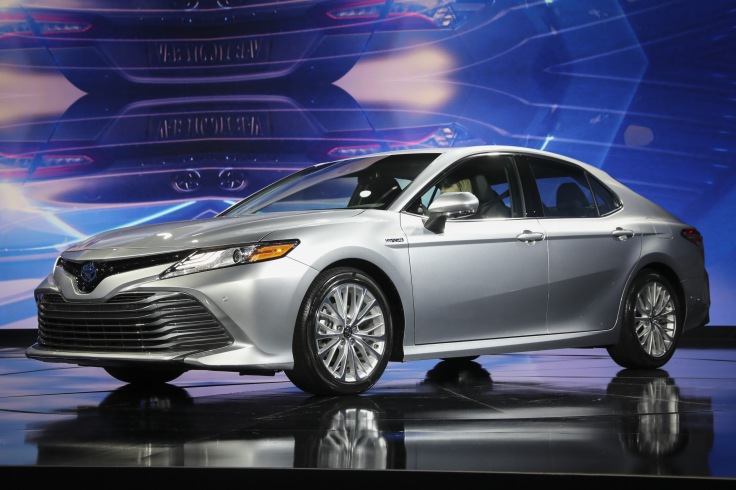 Despite the booming popularity of compact crossovers, manufacturers still obviously believe in midsize sedans. The Camry, despite losing 40,737 customers between 2015 and 2016, still topped the midsize field with 388,618 sold in 2016.

The 2018 model, seeking to mitigate the Camry’s reputation as durable but bland, boasts styling changes and improvements across the board. It is longer, lower and wider, with a lower center of gravity for better handling.

As before, there are four versions: LE, XLE, SE, and XSE. The LE and XLE models have a different grille from the S and XSE versions and are oriented toward comfort. The S and XSE models have a more sporting personality. Power choices are a 2.5-liter four-cylinder engine, a 3.5-liter V6 and a hybrid.

For 2018, all Toyota Camry models get the company’s Entune 3.0 connectivity system, which includes navigation and a host of other state-of-the art features.

Over at the Lexus display, the attention grabber was the all-new LS500, which at 17 feet 2 inches long is bigger and classier than ever, rivaling the Audi A8, BMW 7 Series, Jaguar XJ and Mercedes-Benz S-Class. The LS500 is powered by a 415-horsepower 3.5-liter V6 engine with twin turbochargers, a 10-speed automatic transmission and a predicted zero-to-60 mph acceleration time of 5.1 seconds.

Among other things, its standard and optional features include a 12.3-inch center screen with navigation and handwriting recognition, air suspension system, heated, cooled and massaging front and rear seats, and a detection system that can trigger braking or steering around a pedestrian.

Most of the excitement among enthusiasts, however, focused on the Kia Stinger, an all-new car with a new name. It marks a milestone at the South Korean manufacturer, which delivers high quality cars, crossovers and even a minivan.

The midsize Stinger is a performance-oriented Gran Turismo four-door with a fastback design and a rear hatch, not unlike the larger Audi A7, which competes among cars that can cost up to $80,000.

Few Stinger details were available at the introduction, including the price, but it likely will be way less than the A7’s—more competitive with the likes of the BMW 3-Series, Audi A4, Jaguar XE, Lexus IS and Mercedes-Benz C-Class cars.

With rear-wheel drive or optional all-wheel drive with torque vectoring for improved handling, the Stinger will offer two power plants: 225-horsepower turbocharged 2.0-liter four-cylinder engine or a 365-horsepower twin-turbocharged V6 engine. The transmission is an eight-speed automatic with paddle shifters for a manual shifting mode. No manual gearbox was considered.