The Fogelson fleet is rather small. I own a 2014 Mazda CX-5 crossover vehicle (“Maus”), a 2012 Mazda3 (“Mori”) and a 1993 Harley-Davidson Sportster Deluxe (“Manny”). The CX-5 is my daily driver, and the Sportster is my trusty motorcycle. Mori the Mazda3 is my wife Robin’s car, providing transportation to and from work every day.

Robin loves Mori. We bought the car new in 2012, and it has been trouble-free ever since. She loves the size, handling, performance, comfort and style of the compact five-door, and I have been so pleased with it that when it came time to replace my beloved Toyota 4Runner (“Moose”), I decided to downsize to the CX-5.

So, when I got a chance to spend some time with the new Mazda3, I approached it with great familiarity with the car. Sitting nose-to-tail with the 2012 model, I noted the similarities and differences with interest. Though Mazda3 got a makeover for the 2014 model year, it retains many of the design cues that attracted us to the vehicle in the first place. The front end has been refined with a new grille, and the rear fascia has newly elegant tail lamps. The body is a little curvier, a little more muscular, and a little less cute than the 2012 model – not necessarily a bad thing. Inside, the design is a little more refined, with a touchscreen display on top of the center stack and upgraded materials.

The thing that sealed the deal for Robin when buying the 2012 Mazda3 was the driving experience. Robin isn’t a performance driver by any means – she’s a classic commuter, and prizes reliability and ease of use over handling. But she loves the road feel and stability of her little car, and chose it over its competitors for that reason.

I prefer the 2017 Mazda3 to our 2012. I like the interior and exterior styling better, and the newer car felt a little tighter and crisper during driving tests.

I asked Robin if she’d like to replace Mori with a new 2017 Mazda3 after we spent a week with the car. “No,” she responded. “I love my little car.” I must admit, I’m proud of my wife. She knows what she likes, and she’s not easily seduced by the shiny new thing. I’m a lucky man.

Read my 2017 Mazda3 Test Drive and Review on Forbes.com. 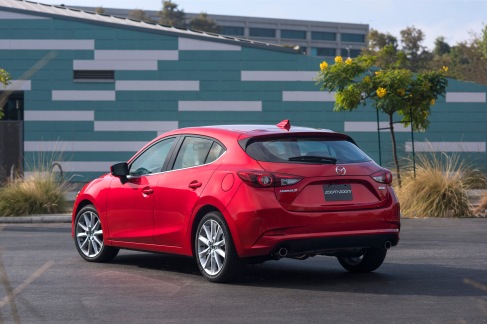 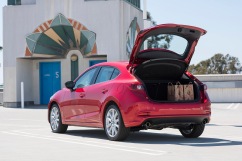 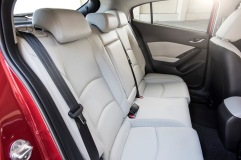