Sometimes, as with the 2019 Kia Sorento SXL, it’s good to resist too much change. It remains essentially as it was in 2016: a midsize crossover sport utility vehicle that is handsome, quiet, safe, comfortable and competent.

The few additions and modifications, though they make all versions more expensive than their predecessors, mostly enhance the South Korean’s appeal. A third row of seats now is standard across the lineup and the tested SXL with all-wheel drive comes with driver alertness monitoring, lane-keeping assist, adaptive cruise control, forward collision avoidance with pedestrian detection, blind-spot alert and rear cross-traffic collision warning.

A large panoramic sunroof opens wide at the front and features one-touch controls for the motorized section and the opaque sun shade.

The tested SXL AWD had a starting sticker price of $47,480. With a few options, it topped out at $48,020, right up there with competitors that include the somewhat larger Subaru Ascent, Volkswagen Atlas, Ford Explorer and Chevrolet Traverse.

Like the Mazda CX-9 and the downsized GMC Acadia, the Sorento is a bit of a tight fit for a three-row crossover. Its third-row seat can accommodate, with their knees at belly-button level, a couple of average-sized adults as long as the second-row passengers move their seats forward to provide knee room. Crawling back there takes athletic ability more common to teen agers than empty nesters.

The plush front seats are supportive and comfortable with modest bolstering. Outboard back seats are nearly as cozy. However, though there’s enough head and knee room for the center-rear passenger, the poor soul must perch on a hard cushion.

There are six trim levels, starting with the $26,980 front-drive L version. It and the LX use the 2.4-liter engine with a six-speed automatic transmission. Upper trim levels — LX V6, EX, SX and the tested SXL — are powered by the 3.3-liter V6 and an eight-speed automatic transmission that can be shifted manually with the shift lever, though there are no paddles on the steering wheel.

The base L  model comes only with front-wheel drive. All-wheel drive is optional at $1,800 on all of the other models. But the Sorento obviously is not intended for serious off-road adventures; the all-wheel drive delivers increased driver confidence in snow and other foul weather conditions.

The tested Sorento had four driving modes that adjust transmission shift points and other vehicle parameters: Comfort, Eco, Smart and Sport. They can be selected manually or will automatically adjust to the driver’s style and habits.

In any drive mode, the Sorento is as silent runner as can be found in its class. Plenty of insulation and acoustic glass in the windshield and front windows contribute to a hushed environment. Muted sounds make their way into the cabin, but they mostly come from the pockmarked urban streets that have become the default U.S. standard. Road noise, as well as mechanical and wind sounds, are practically nonexistent on smooth asphalt.

The Sorento’s V6 engine and eight-speed transmission deliver plenty of power for freeway merging, two-lane highway passing and fatigue-free all-day Interstate cruising. Handling is secure on curves without excess body lean and few steering corrections are needed in straight-line driving. City/highway/combined fuel consumption is rated by the EPA at 19/24/21 miles per each gallon of regular-grade gasoline.

American made in West Point, GA, the Sorento sports handsome crossover styling with Kia’s trademark “tiger nose” grille. The company’s design chief, Peter Schreyer, who formerly worked for BMW and Audi, has said he believes it has the same staying  power as BMW’s dual-kidney grille design.

On the sales charts, the Sorento has been the best-selling Kia crossover SUV. In 2017, sales totaled 99,684 and in 2018 it has been on a pace to escalate into six figures. 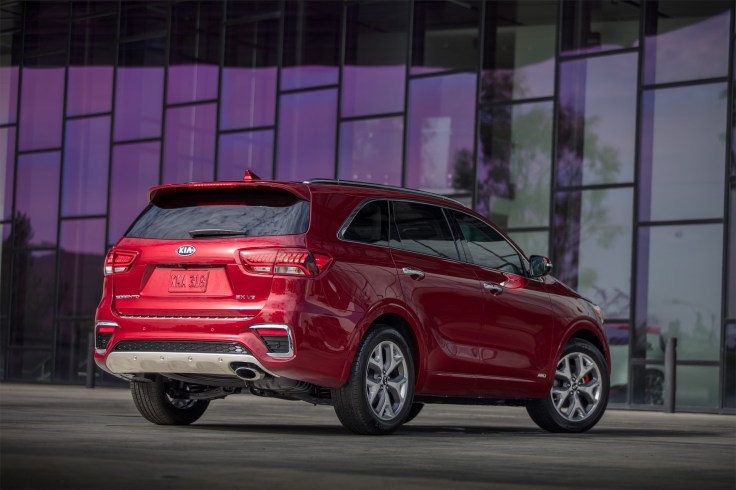