If you’re done with conventional sedans and station wagons but not quite ready for a tall crossover sport utility vehicle, take a look at a ‘tweener like the 2018 Audi A4 allroad.

It is a station wagon, yes, but taller — though not as tall as the crossovers that are steadily taking over the marketplace to the point where sedans and wagons are an endangered species.

Unfortunately, tall wagons are few in number and mostly  tilted toward the luxury class. Besides the A4 allroad, they are the Volvo V60 and V90 Cross Country models, the Jaguar XF Sportbrake and the Buick Regal TourX.

All of these offer all-wheel drive and a lower center of gravity for more sporting handling than most crossovers. They also are slightly taller than their station wagon brethren.

The Audi allroad is the granddaddy of the tall wagons, dating back nearly two decades in A6 and A4 trim. For 2018, as in 2017, the A4 allroad arrives with a 252-hp 2.0-liter turbocharged four-cylinder engine that makes 273 lb-ft of torque.

A seven-speed dual-clutch automatic transmission sends the power to Audi’s famed quattro all-wheel drive system, now with a new wrinkle. For economy, it operates in front-wheel drive under normal conditions. As soon as slippage is detected, it switches instantly and seamlessly in milliseconds to all-wheel drive.

We know this only because we have been told verbally and in the literature. Driving the A4 allroad, you never detect the changeover. The twin-clutch automatic is similarly quick, said by Audi to shift in 1/100thof a second.

All of this conspires to launch the allroad to 60 miles an hour in less than six seconds, according to Audi and independent tests. Top speed is governed at 128 mph, though most owners likely will never bother to experience it.

However, the rapid acceleration can’t happen if you allow the engine stop-start to be turned on. Then you get that dreaded hesitation off the line, although it doesn’t shudder as much on the allroad than on some other vehicles. Fortunately, the stop-start can be turned off, though you must do it every time you start the engine.

Of course, you don’t buy a tall wagon like the A4 allroad to compete in autocrosses or bounce over trackless terrain like a Jeep or Land Rover. However, it is equipped with five driver-selectable drive modes, including an off-road setting that optimizes transmission shifting, steering and adaptive suspension settings that enhance performance off the pavement. 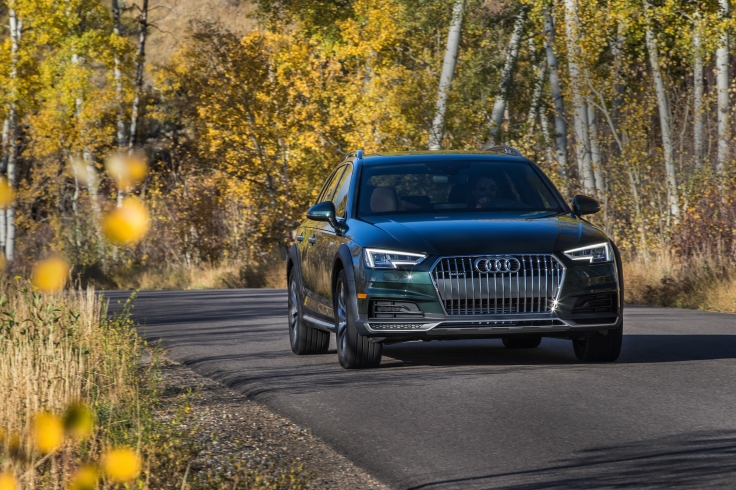 Besides off-road, the other settings are comfort, automatic, individual and dynamic, with the last the tightest for on-road performance. The individual setting can be tailored for the driver.

Most owners are unlikely to do much off-roading in any case. The allroad, like other Audi models, is a classy, luxury vehicle to be polished and admired, not bashed and scratched.

The quattro all-wheel drive does impart an ambiance of confidence in foul weather conditions, especially deep snow, and does so with the panache of a quiet butler in a palace, always ready with a tray full of capabilities.

One of those, of course, is utility. The allroad has midsize sedan space for passengers, though the center-rear position, as is usual in almost every vehicle, is cramped and uncomfortable. But the big payoff lies in cargo space. There’s 24 cubic feet of it behind the second-row seats, more than enough for everyday favorite things. Flop the rear seatbacks and it expands to 59 cubic feet to haul the dorm room stuff of a new college freshman.

Though it is a luxury vehicle, the allroad is not outrageously expensive given its features. The base price is $45,475 and, with options that included a Premium Plus package, the tested price came to $53,750.

That covers full safety equipment, including Audi’s pre-sense collision avoidance system, which detects objects and pedestrians, and can bring the allroad to a stop anywhere under 25 mph — a boon in modern urban stop-and-go traffic.

However, the equipment did not include such items as adaptive cruise control, lane departure mitigation or blind-spot warning. 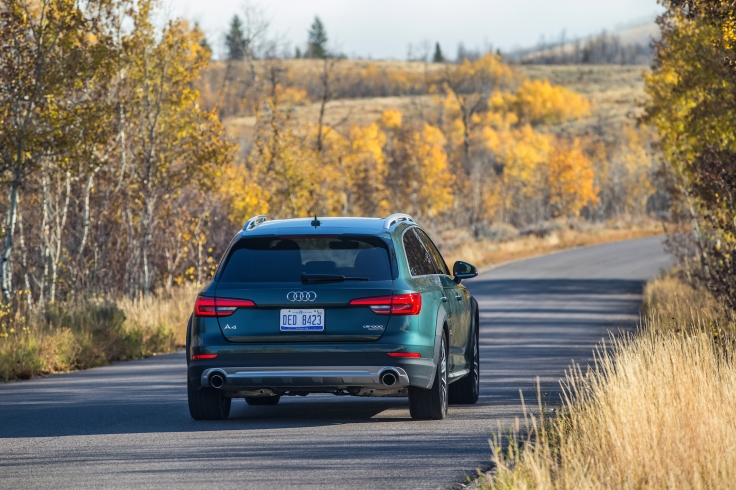