The best standard equipment on the 2018 Lexus LS 500 luxury sedan is its driver-oriented personality.

It’s interesting that a nameplate could produce such excellent products over its 28-year lifetime that it would get rapped for being too good. Polite people said a Lexus was done so well that it was unobtrusive — like a silent butler. Arch critics said it was boring, even sleep-inducing.

The executives, designers and engineers at Lexus, Toyota’s luxury division, eventually felt wounded enough that they decided to inject the LS 500 flagship with doses of automotive pheromones to get enthusiasts’ juices flowing.

The effort went all the way to the top with final approval test drives by none other than Toyota’s chairman, Akio Toyoda, a well-known driving aficionado, who drove the LS 500 repeatedly. Photos of him in a helmet and racing coveralls at a test track were shown at the national press introduction.

In motoring circles, an article of faith for years has been that German luxury cars — Mercedes-Benz, BMW and Audi — were most prized by enthusiasts. Not only did they exhibit superb handling, performance and braking, you could actually hear the growl of the engine under hard acceleration and even cruising on the freeway.

The Lexus, on the other hand, was usually so quiet you had to listen carefully or check the tachometer to find out whether the engine was actually doing its thing or was possibly an electric.

That’s now in the past. The new Lexus LS 500 takes on the Germans in a way that it has not done before, including actual engine sounds intruding into the passenger pod. Some items:

All three LS 500s can be ordered with all-wheel drive as well as the standard rear-wheel drive. All-wheel drive versions get slightly lower fuel economy ratings than the rear-drivers. With a starting price of about $76,000, sales start in February.

Because some buyers likely will employ chauffeurs, an optional package enables the right-rear seat to be reclined with a full footrest, while at the same time moving the right-front seat out of the way.

Surprisingly, this new Lexus is not a large car by the U.S. government’s definitions. With 98 cubic feet of space for passengers and 17 cubic feet of volume in the trunk — a total of 115 cubic feet – the LS 500 is classified as a midsize, which no doubt contributes to the excellent handling. However, it feels roomy on the inside, with surroundings that include soft leather upholstery, hand-pleated origami-style cloth, laser-cut wood-grain and jewel-cut glass. 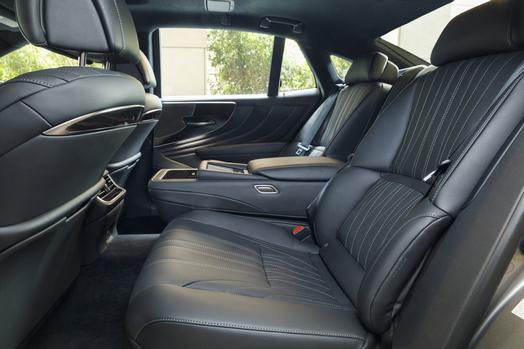 Contributing to its luxury/sport sedan feel is the exterior coupe-like styling. This is not new. Other luxury competitors have models with that bumper-to-bumper flow, which in the middle of the last century was called a “torpedo body” and has become widespread again.

Asked why they invested so much effort in a flagship sedan when the industry trend is toward crossovers and traditional sport utility vehicles, Lexus officials said they believed most of the LS 500 customers already owned SUVs. If not, they pointed to another top model: the LX SUV. There’s also the all-new LC 500 sports coupe.

When the discussion gets exhausted, the conclusion for the new Lexus LS 500 is that you can obtain the automotive equivalent of having your cake and eating it, too — that is, an extravagant luxury conveyance with sport-driving credentials. 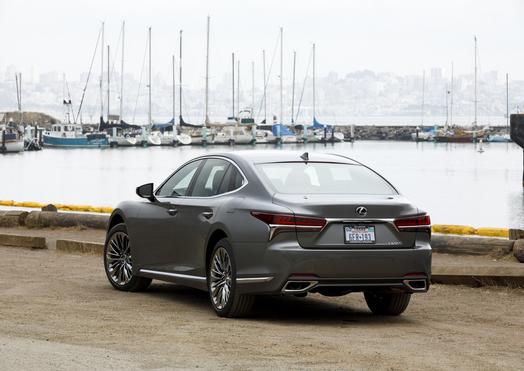