The Beetle builder goes big with the 2018 Volkswagen Atlas.

Though the Beetle’s sidekick — the famed VW microbus of the 1960s — could carry as many passengers, the Atlas is the biggest Volkswagen ever. Moreover, it was designed for American buyers and is built in the United States.

Of course, VW’s reputation was established with the Beetle, the sturdy two-door, rear-engine sedan that entranced buyers following World War II and into the mid-1970s.

Nowadays, however, if you want to compete in the world-wide vehicle industry, you must field at least one crossover sport utility vehicle. Better yet, provide choices.

Compact and midsize crossovers are taking over the marketplace as buyers recognize the utility of a machine that carries big cargo loads and passengers, can be equipped with all-wheel drive for safety in foul weather, and deliver modest off-road performance.

Volkswagen already had two crossovers in its lineup: the compact Tiguan and the midsize Touareg. Both have two rows of seats to accommodate up to five passengers. 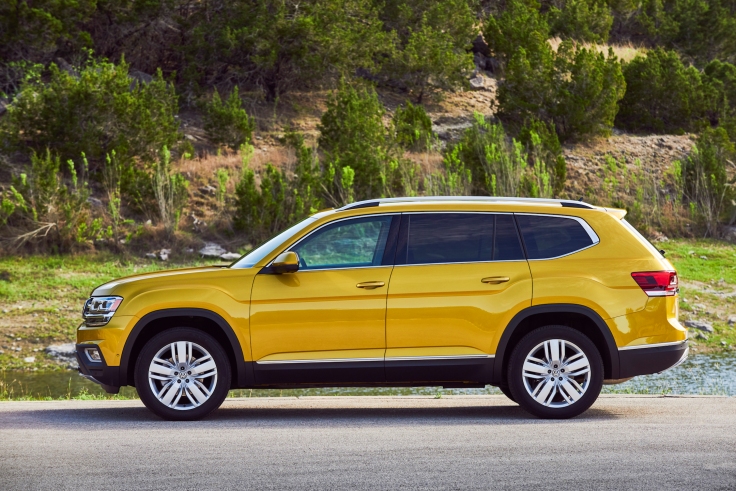 But VW’s country of origin is Germany, where manufacturers like BMW are relentlessly trying to plug every market niche with their vehicle lineups, especially with crossovers. It was inevitable that Volkswagen, with its goal of becoming a full-line family-oriented automobile company, would deliver a full-size crossover that can carry up to seven passengers.

Moreover, the company is working hard to regain the trust of consumers in the wake of a scandal in which it admitted violations of federal anti-pollution laws by faking diesel engine emissions test results.

No surprise, there will be no diesel engine for the new Atlas. Two gasoline engines are offered: a 235-hp turbocharged 2.0-liter four-cylinder, offered only in front-wheel drive models; and a 276-hp 3.6-liter V6, available with either front-drive or all-wheel drive. Both get the power to the pavement through an eight-speed automatic transmission.

At the introduction, the tested Atlas crossovers were equipped with the V6 engine, most with all-wheel drive. The 2.0-liter four-banger will arrive later in the model year.

Starting prices for six trim levels of the Atlas, including an S launch model with the V6 engine and front- or all-wheel drive, range from $31,425 for the base four-cylinder S version to the top-line Atlas SEL Premium at $49,415. The latter was tested for this review. All prices include the $925 destination charge.

The SEL Premium was as well equipped as almost anything you’d find in a showroom. In addition to the V6 engine and all-wheel drive, it comes with leather upholstery, three-zone automatic climate control, panoramic sunroof, 20-inch aluminum-alloy wheels, LED headlights and taillights, park assist, ventilated front seats and heated rear seats, and a Fender premium audio system. The tested Atlas also had the optional second-row individual seats, which reduced the passenger accommodations from seven to six.

The captain’s chairs are slightly smaller than the front seats but offer support and comfort. They recline and feature about eight inches of fore and aft travel, which helps to divide the knee room between the second and third rows of seats. Head room is generous.

A minor complaint: the shade for the sunroof is made of a perforated cloth that allows too much sunlight to intrude into the passenger pod. This has unaccountably become a common feature on some luxury cars. Sunshades should be opaque.

With either the second-row bench seat or the captain’s chairs, the Atlas maintains 21 cubic feet of space for cargo behind the third row, which can accommodate two average-sized adults, though they sit with their knees raised high. Fold the third row and the cargo space expands to nearly 56 cubic feet.

On the road, the Atlas has a substantial feel. It is a big vehicle — 16.5 feet long and weighing 4,502 lbs — and it feels big. It has plenty of power though it is not particularly nimble. But it tracks cleanly on the highway with few steering corrections needed. Cornering on twisting roads is capable as long as you don’t push it too hard.

The ride is comfortable and there’s little intrusion of wind and mechanical noise, though rough pavement elicited a harmonic thrum from the tires that made its way inside.

Like its competitors, the Atlas will please customers who want family space and comfort without resorting to a minivan. 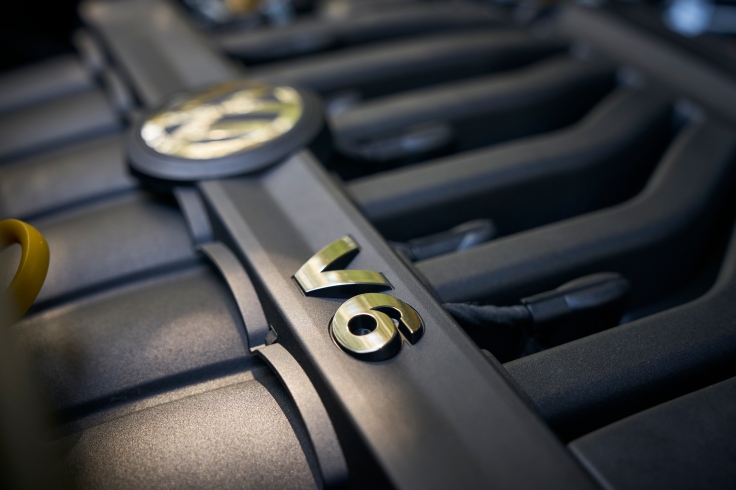