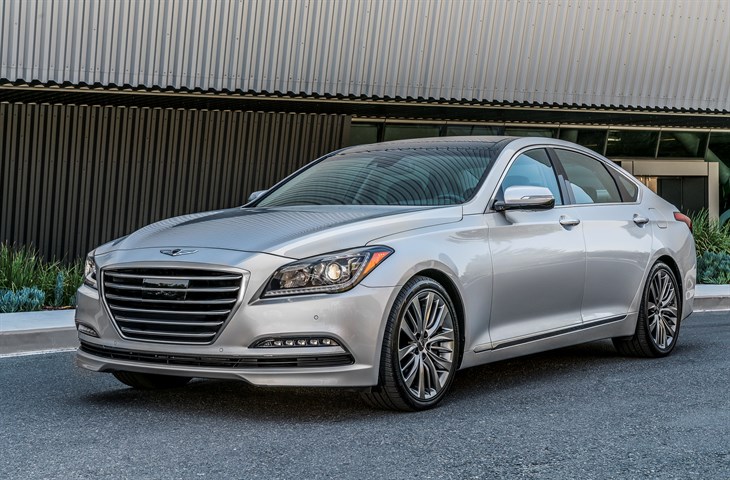 Genesis, the new luxury brand from Hyundai of South Korea, takes a turn down nostalgia road with its 2017 G80 5.0 Ultimate.

This big four-door cruises serenely with a powerful V8 engine thrumming under the hood, delivers stealthy shifts from its eight-speed automatic transmission and gets the power to the pavement with rear-wheel drive, just like a traditional proper American sedan. 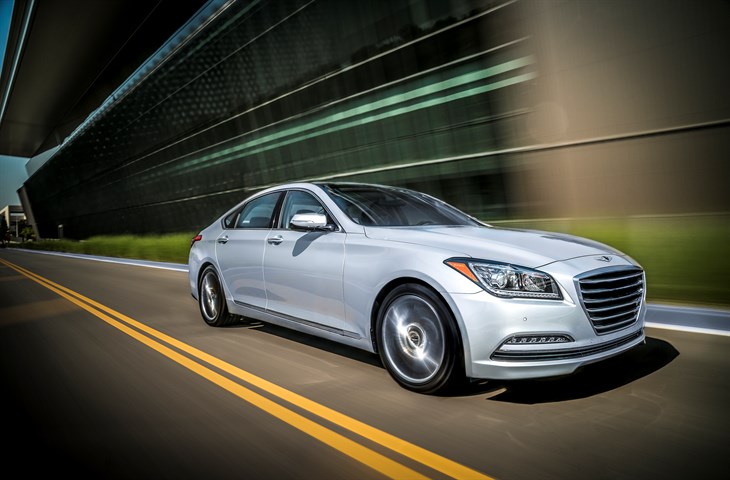 Any senior citizen who was fond of a big Oldsmobile, Buick, Chrysler or Mercury would settle in comfortably and experience familiar feelings in the Genesis G80. He or she also likely would be dazzled by its advanced performance and handling, and its array of modern safety, connectivity and convenience features.

Though it’s a youngster in the marketplace, the Genesis already has stutter-stepped its way to its current status as one of two new luxury sedans from a new luxury nameplate. It started out as the top-of-the line Hyundai, then dropped to second place when the company introduced its flagship Equus in 2009 as a competitor to the Mercedes-Benz S-Class, BMW 7-Series, Lexus LS and Audi A8.

Even at the outset, some Genesis buyers were reluctant to label their cars with their Hyundai parentage, which encompasses a variety of models from the economy Accent on up. They removed the Hyundai badges and substituted the Genesis escutcheon.

Then the company decided to establish a separate luxury brand, much as Toyota had done with Lexus, Honda with Acura and Nissan with Infiniti. It chose Genesis as the name and, using the Hyundai Equus as a starting point, introduced the new flagship Genesis G90.

The former Hyundai Genesis then became the Genesis G80, the subject here. It is the second model in the lineup, slotted below the G90, and will be joined in the future by other luxury Genesis models.

One of them is expected to be a coupe. But what is really needed — and no doubt is being developed—is a crossover sport utility vehicle, either as a compact or midsize, because buyers cannot seem to get enough of those types of vehicles. For example, the best-selling Porsche is the Macan, a compact crossover.

Meanwhile, Genesis seeks to win converts with the G90 and the G80, the subject here. There are three versions: two with V6 engines and rear-wheel or all-wheel drive, and the tested V8 model, which comes only with rear-wheel drive.

It’s fair to say that the G80 RWD 5.0 Ultimate has little competition. There are other full-size luxury sedans but few that compete directly with the G80. The BMW 7-Series and Mercedes-Benz S-Class are way more expensive, and others like the Chevrolet Impala and Ford Taurus have lower prices and come with front-wheel drive or all-wheel drive.

The closest competitor is the Chrysler 300, which is about the same size and priced a bit lower than the G80, though Chrysler offers all-wheel drive as an option.

The G80 starts at about $42,350. For the Ultimate V8 model tested here, the starting price — nearly the same as the bottom line sticker—was $55,500, including the destination charge. That’s because the Ultimate comes lavishly equipped. With a couple of minor options — mud guards and wheel locks—the tested Genesis checked in at $55,670.

A note about the G80’s blind-spot warning. Usually these systems, which flash a warning when a vehicle enters the so-called blind spot, are unnecessary if the driver has the smarts to adjust the outside mirrors properly.

On the G80, an icon of the car in the “blind spot” also shows in the head-up display along with the car’s speed and the speed limit. So even if the mirrors are adjusted correctly, the driver becomes aware of the “blind spot” vehicle without checking the mirrors. 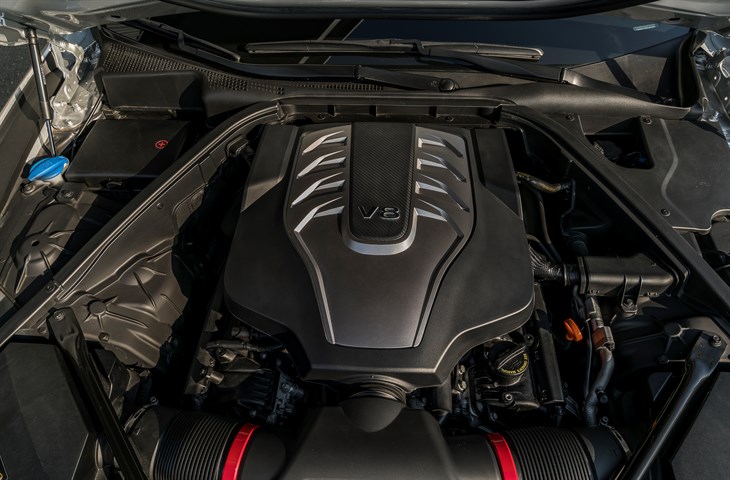 There is much to enjoy about the V8 G80. It is a great long-distance road car with a heavy feel and lavish comfort for four, cruises quietly and delivers reasonable fuel economy along with zero-to-60 mph acceleration of slightly more than five seconds.

The only daunting characteristics are a couple of owner’s manuals in English, Spanish, French and Korean that total 1,060 pages. Probably best to take them out of the car and exile them to a remote location.