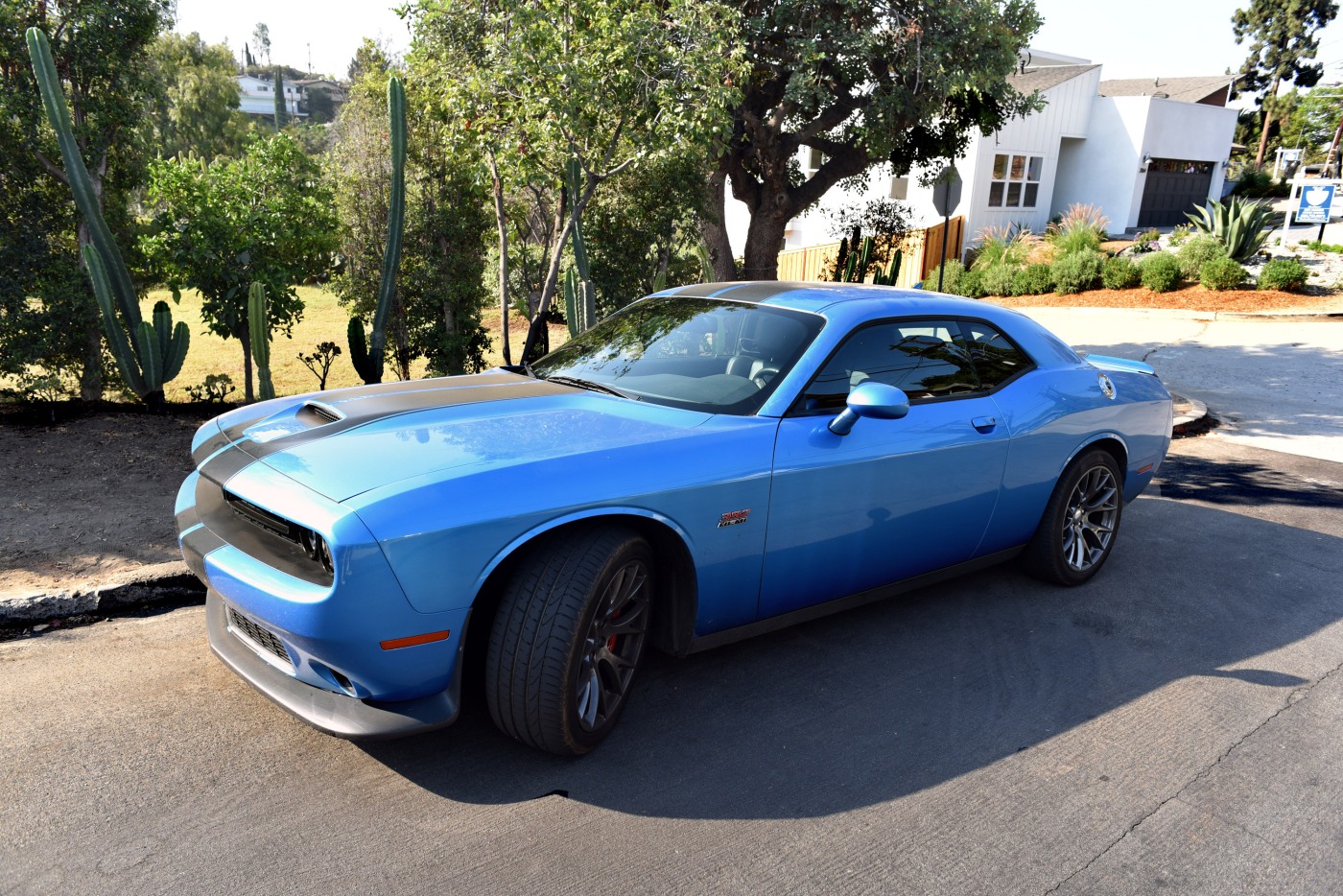 America has a lot of big, open, long, largely empty highways.  Thank you Cold War and President Eisenhower.   The national interstate highway system with the instantly recognizable curved sign, with a number in white on a blue background and the word “INTERSTATE” in white letters on a red background at the top – that’s only 50 years old.   June 29, 1956 is when President Eisenhower signed the law that created the system because of what was felt at the time the strategic necessity of having a coast to coast system of quality roadways – to move troops and equipment in case of war.   The bill actually uses the words “in case of atomic attack.”

Lucky for us the atomic war hasn’t happened yet.  And lucky for us that we have cars like the Dodge Challenger SRT 392 with a 485-hp HEMI V8 and a 6-speed manual transmission driving power to 20-inch wheels controlled through deceleration via Brembo brakes.   With red calipers.   Because the red ones look cool. 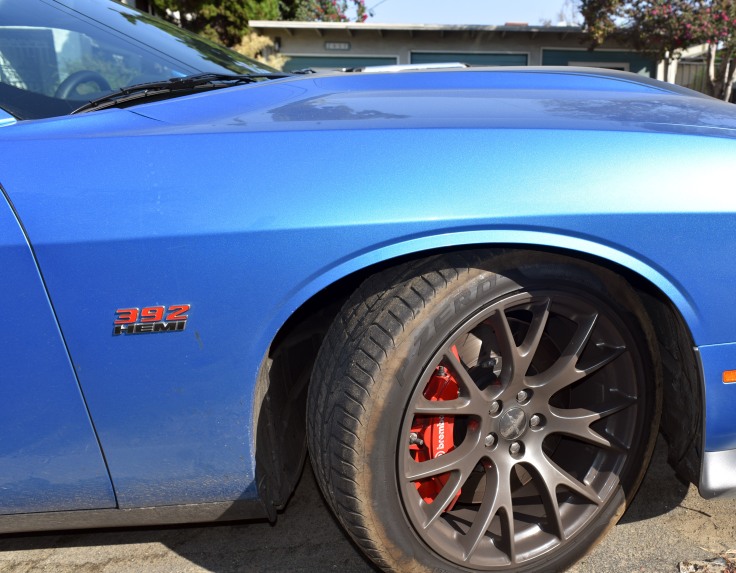 But it’s not the stopping that gets our hearts racing.  It’s the going fast.  And the best use of those strategic assets we call “highways” is to go fast in American muscle.

There is the Mustang, and the Camaro, and the Challenger.  Always a little beefier, broader in the shoulders and more imposing in design, the latest iteration of the Challenger was reborn in 2008 after dying in 1974.  After eight years, refinements have been made so that the brawn remains. Yet through some modern technology and effective engineering, there’s a surprising amount bit of nimbleness on hand in the 2016 version.

For me, the really interesting thing about driving this brand new 2016 Challenger SRT 392 is that back in 2013 when I was the Executive Producer of “Joe Rogan Questions Everything” for A. Smith & Co. on SyFy, my friends at FCA loaned us a current (2013) model Challenger SRT with a manual transmission for Joe to drive as his hero car. Which meant (of course) that when Joe wasn’t driving the car, the production department took care of it.  That afforded me a reasonable amount of time behind the wheel.

Powerful?  Yes.  Smooth, responsive, well-mannered?  No.  Out on the Eisenhower highways? Look out.  Roll into some tight turns, switchbacks and two-lane awesomeness? Not so much. 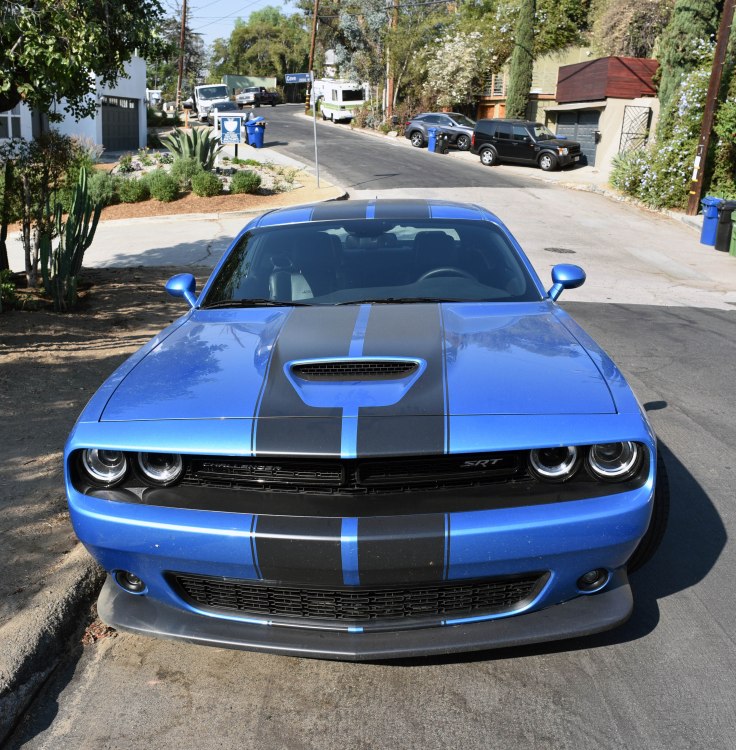 Fast-forward to this August, 2016, when the new 2016 Challenger showed up for me to drive to Monterey Car Week, and then up in to the Sierra Mountains for a few days, I had the perfect opportunity to see and feel for myself if the new upgrades – like the “Bilstein Adaptive Dampening System with an independent front short- and long-arm design and multilink rear design,” according to Dodge promotional materials – had the kind of impact I could feel.

After hundreds of miles, and roads as varied as eight-lane interstate highways to two-lane mountain roads – from the long, flat and straight to the constantly curving, ever-changing in both camber and elevation – the Challenger consistently performed beyond expectations. 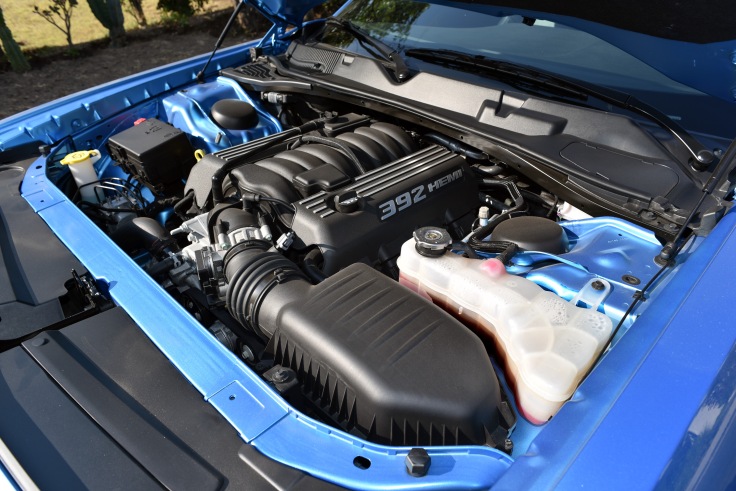 Forward visibility is perfect, with the large sweep of windshield glass.  Side-to-side view is fine.  Looking over one’s shoulder is pretty useless – the rear sightlines are limited, and the two best places to look are in the rear-view mirrors or the back-up camera, which catch pretty much everything.  This is an instance of an effective application of modern technology combined with old-school reflection.

Back seat space is minimal.  Like most sports cars, even the ones with 2+2 in their title, it really means the two seats in the back fit one person sitting sideways.  In that configuration most cars of this ilk are effective as three seaters.  The only time four makes sense is when the rear passengers are young, or stars of a TLC little people series. (No offense meant to little people of course.)

For long distance driving, the front seats were unexpectedly comfortable.  Controls of all sorts were sensibly placed and well labeled.  The large screen used to control the various systems and the display for the back-up camera is happily touch screen.  (Something Mercedes can’t seem to figure out, in some semblance of obstinacy or feigned Teutonic superiority. But really.  As the control mechanism, the knob is dead. Come on, Mercedes — embrace the touch screen.) 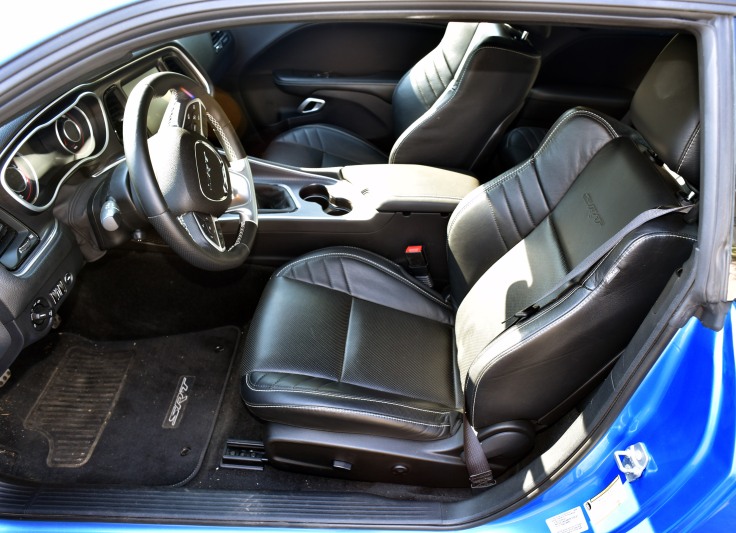 Driving the Challenger is a pleasure.  The sonic feedback from the engine has been dialed in just right.  Noise level in the cabin is better than expected. While the engine revs and shifts, the sounds are as tactile as they are auditory in their pleasure.  Diving in and out of curves on a two-lane mountain road in the Sierras, I was able to stay on my side of the road, experience a bit of the thrill of hitting the apex just right, without the sensation of being thrown around in the cabin.  The new suspension set up worked admirably.  For a vehicle with a 4,200-lb curb weight, the thing moved with an unexpected nimbleness.  The hood scoop is functional – air does flow in.  There is no mistaking where the gasoline goes in to the car – the oversized hinged circle says “FUEL” on it in great no-nonsense “here-I-am” fashion – kind of like the car itself. 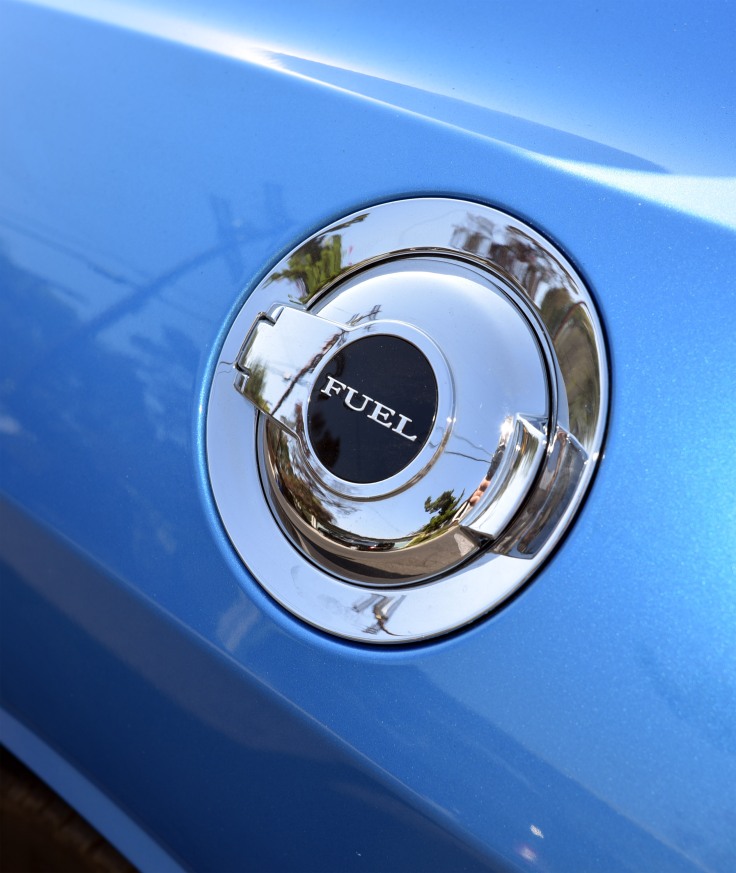 Some cars I get to drive are perfect opportunities to explore a specific type of vehicle, and I’m fine returning them to the manufacturer.  Others stand out as cars that – if I had unlimited funds – would be welcome additions to my stable.  The Dodge Challenger SRT 392 Hemi six-speed definitely fits in that latter class.  I miss it. 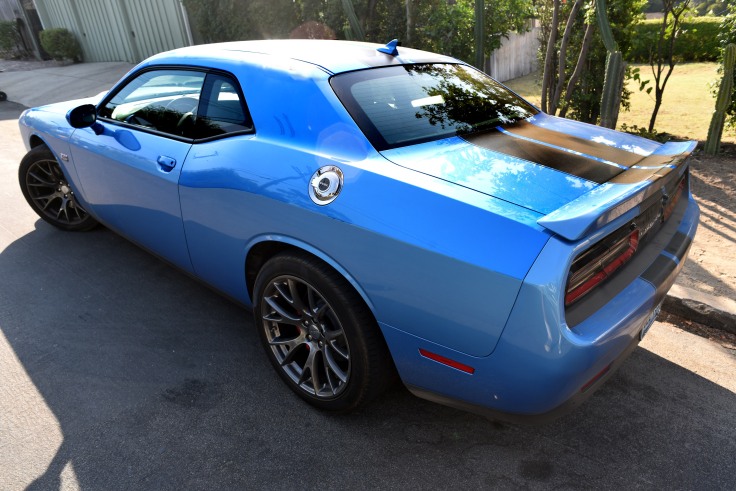