The Mercedes-Benz A220 4MATIC sedan, an all-new entry-level model from the German luxury manufacturer, turns heads and invites comments attesting to its striking styling.

It’s as if this small car, only a couple of inches shorter than the new economy-model Nissan Versa and with less interior room, surprises onlookers with its presence.

Well, it should, if for nothing else than its price tag. While you can buy a satisfactory top-line Versa SR for about 20 grand, the A220 has a starting price of $35,495. With the customary European luxury-car list of expensive options, the test car checked the boxes with a sticker of $49,785. You can save $2,000 by skipping the 4MATIC all-wheel drive.

Though marketed as subcompacts, both cars barely sneak into the compact class by the U.S. government’s definition: a car with interior space of 100 to 109 cubic feet, including the trunk. The A220 4MATIC has 102, with 93 cubic feet for passengers and shy of nine cubic feet in the trunk. The Versa has 104 cubic feet, divided at 89 for people with a large trunk of 15 cubic feet.

But enough of size comparisons. The A220 and the Versa do not circulate in the same company. Though either will get you to where you are going, the valets who park the Mercedes will expect a way bigger tip. Versa owners likely will self-park or seek out a street space. 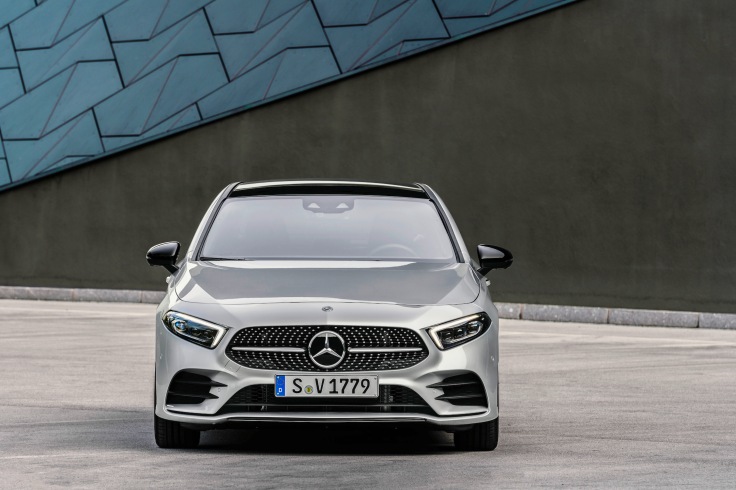 Of course, few Mercedes customers would even deign to look at a Versa, much less drive one, and it’s likely most Versa customers would not have pockets deep enough to venture into a Mercedes showroom.

The new A220 should not be confused with the CLA, another compact sedan that Mercedes calls a “four-door coupe.” Though both cars are built off the same front-drive architecture, the CLA is three inches longer and boasts sleeker down-low styling with slightly less passenger space — 91.5 cubic feet compared to 93 for the A220. However, it has a larger trunk of 13 cubic feet versus nine cubic feet in the A-220.

Sophisticatedly motivating the A220 is a 188-hp turbocharged 2.0-liter four-cylinder engine that makes 221 lb-ft of torque, or twisting force. It gets the power to the pavement via a seven-speed dual-clutch automatic transmission, which delivers instant shifts up or down and can be manually shifted with paddles on the steering wheel. 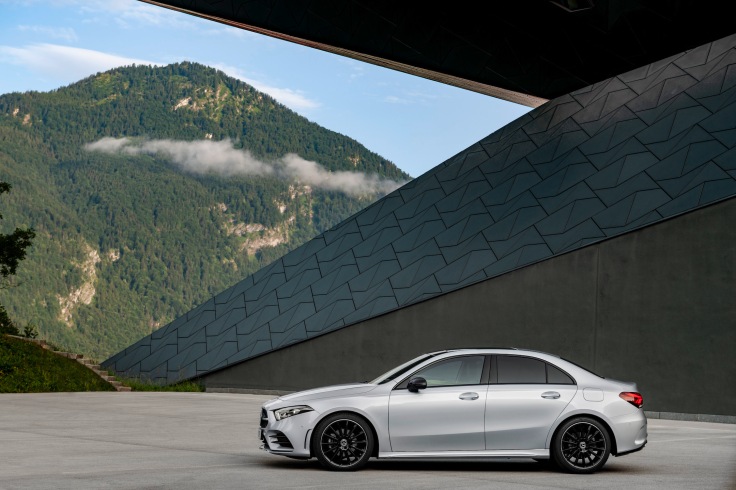 However you choose to do it, the engine-transmission combination will slingshot the A220 4MATIC to 60 mph in about six seconds. It does that with a remarkable lack of any dreaded turbo hesitation.

Despite its size and relatively light weight of 3,417 lbs, the A220 feels like a Mercedes-Benz, with handling responsive to the weighted steering. It tracks steadily in a straight line, cruises quietly, brakes smartly and its optional adaptive damping suspension system and tires mostly absorb the damnable road irregularities that increasingly plague U.S. roads.

So if nothing else, it’s a good thing for a car like the A220 to have  robust, quality underpinnings. At its price point, it also has many other desirable qualities, along with a few fluffs.

Much of the desirable stuff comes with an additional price tag on the options list, including the comprehensive safety equipment: Distronic adaptive cruise control, automatic emergency stopping, lane-keeping and emergency steering assist, and blind-spot warning.

The head-up display is unusual in that it has a readout that displays the distance between the A220 and the car ahead, up to 300 feet. However, although it shows the speed of the car, it does not indicate the speed limit. For that, you have to glance down at the dashboard instruments.

The test car also had a curious intervention. On some cars, when you shut down the engine and open the door, the driver’s seat automatically moves back to facilitate exit and entry. On the A220, it does the opposite. The seatback pushes forward, as if to squash your chest into the steering wheel. It does not, fortunately.

Other fluffs: the shade for the panoramic sunroof is not opaque but made from a flimsy material that admits heat and sunlight. Sun visors do not slide to block sun from the sides. And there were no inside assist handles — only coat hooks combined with reading lights.