The 2019 Mazda3 Hatchback epitomizes the company’s goal of developing vehicles that punch above their weight.

This a slinky, stylish, fully-realized four-door for four (though there’s a seatbelt for a hapless soul in the cramped center-rear seat) that has the appointments and feel of luxury compacts costing thousands of dollars more. 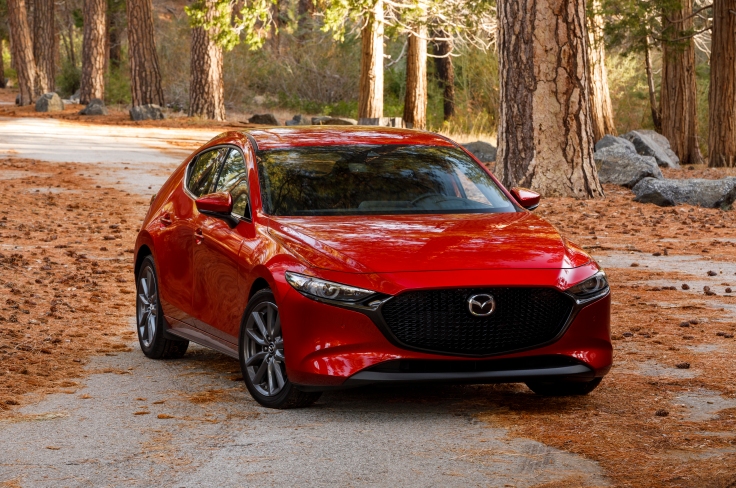 It leans more in that direction and away from the so-called “hot hatch” category characterized by machines like the Hyundai Veloster N, and Volkswagen GTI and R models. But slotting between those two categories makes it more versatile for enthusiasts as well as people who value quality transportation that does not require a second mortgage.

The first impression is the styling. Nobody buys a car that is unattractive; something they would not want to be seen in. The Mazda3 is a beauty with artistic lines that belie its hatchback configuration.

That, of course, requires compromises — in the Mazda3 a low roofline that dictates a fanny-down seating position and limited headroom in the back seat. If you want something higher and airier for Uncle and Grandma, check out the Mazda CX-5 crossover.

The Mazda3 Hatchback AWD satisfies on multiple fronts: With 186 hp and 186 lb-ft of torque from its 2.5-liter four-cylinder engine, operating through a snap-shifting six-speed automatic transmission, it can nail zero to 60 mph in whiff more than seven seconds, with a factory-limited top speed of 131 mph. 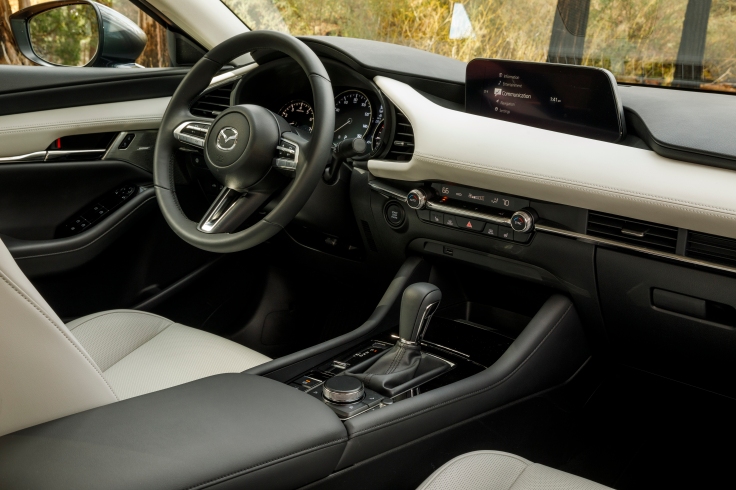 That’s respectable these days but not outstanding. Nevertheless, it’s just one aspect of a car that handles effortlessly, delivers a comfortable ride over most surfaces and cruises quietly on smooth freeways (though defeated by the many pimple-faced roadways around the country). City/highway/combined fuel consumption is rated at 24/32/27 mpg.

A die-hard enthusiast might not choose the Mazda3 Hatchback with all-wheel drive because it comes only with the six-speed automatic transmission, although there are manual-shift paddles mounted on the steering wheel. If you’re one of those, you can save $1,400 by ordering the front-wheel drive model with the six-speed manual gearbox.

The tested Mazda3 Hatchback AWD came with a Premium package incorporated in the base price of $29,920, including the destination charge. With options, the bottom-line sticker came to $31,245 — not inexpensive but about $5,000 less than the current U.S. average price of a new car.

This is the fourth generation Mazda3, which comes as a standard four-door sedan as well as the tested Hatchback. In both cases, Mazda has been concentrating on upgrades intended to transform the 3 into a premium compact.

The list of equipment, including standard and optional items, testifies to the effort. There’s hardly anything missing that you might find on more expensive European cars of a similar size.

Safety-related items on the tester included Mazda’s Smart Brake Support, which uses a laser sensor to detect the risk of a low-speed collision, prepares the system for maximum braking and, if the driver does not brake, automatically brakes and slows the engine.

If you were new to the Mazda3 and had not been briefed, you’d likely be unaware that it is now available with all-wheel drive (front-wheel drive is standard). The system is unobtrusive in normal driving. However, dive at speed into a tight curve on a winding road and the tires take a bite with good steering feel. The all-wheel drive is biased slightly toward the rear wheels for improved cornering.

The Mazda3, as noted, also can be ordered as a standard four-door sedan. Of the two, however, the Hatchback is the choice here. Though it is four inches shorter than the sedan, it has a total interior volume of 111 cubic feet, with 20 of those for cargo and 91 for passengers. The sedan has a total of 108 cubic feet with 96 for passengers and a trunk of just 12 cubic feet. 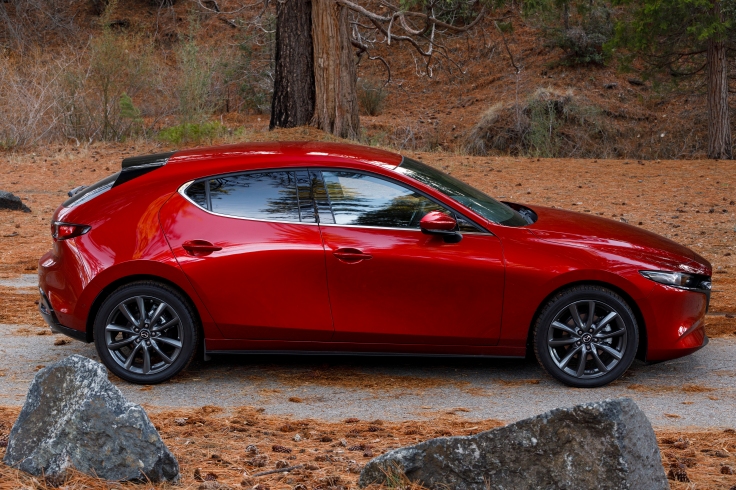