BMW, the Bavarian Motor Works of Germany, has been masterful at plugging holes in its high-performance luxury lineup, especially with crossover sport utility vehicles. Now, with the 2018 X2 xDrive28i, it’s even filling a small gap where there was no hole.

The company, somehow sensing that crossovers would be the next big thing, already marketed the X1, X3, X4, X5 and X6 crossover SUVs, plus higher-performance M versions of the X5 and X6. Most are built in the company’s plant in Spartanburg, SC, and exported around the world.

Now it has slipped the X2 between the smallest X1 and compact X3. But unlike its garage mates, it is more of an amalgamation of a crossover and small hatchback or wagon.

Though built on the same front-wheel drive platform as the X1 and BMW’s Mini Countryman, it is shorter than the X1 with a lower roofline, giving it a sleeker, more sporting appearance while maintaining a crossover look.

For those who haven’t been paying attention, a crossover is an SUV built like a sedan with unit-body construction. A pure SUV, which doesn’t appear anywhere in the BMW lineup, is constructed like a pickup truck with a separate body and frame.

No BMW comes cheap, and the new X2 is no exception. Its performance and quality dictate a high price compared to other, similar vehicles. The tested X2, with xDrive — meaning all-wheel drive — came with a base price of $39,395 and, as tested with a load of expensive options, checked in at $50,920.

On the performance side, it is powered by a 228-hp turbocharged four-cylinder engine, mounted crosswise under the hood like most front-drive based vehicles. The engine makes 258 lb-ft of torque, sent to all four wheels through an eight-speed automatic transmission with a manual-shift mode controlled by steering-wheel mounted paddles.

The combination is enough to propel the X2 to 60 mph in 6.3 seconds with a top speed of 143 mph, according to the manufacturer’s specifications.

Given BMW’s heritage dating back to the remarkable 1600-2 in 1967, it’s no surprise that the X2 handles beautifully, responding rapidly to steering inputs, cornering with minimal body lean and tracking ruler-straight on the highway. The tradeoff is a harsh ride, especially on the increasingly pockmarked roads all over the country.

Some of the harsh ride likely could be traced to the hard run-flat tires, which eliminate the need for a spare. The X2 also was noisy, with engine and road sounds transmitted into the cabin.

But there’s a practical side as well. Passenger volume is 93 cubic feet, which means a couple of adults can sit comfortably in the back seat, though as usual any center-rear passenger gets dissed by a high, hard cushion and a big floor hump.

Augmenting the passenger pod is a cargo area of 22 cubic feet behind the rear seat, which expands to 50 cubic feet with the rear seatbacks folded. Total interior volume of 115 feet would place the X2 in the midsize class if it were a sedan. 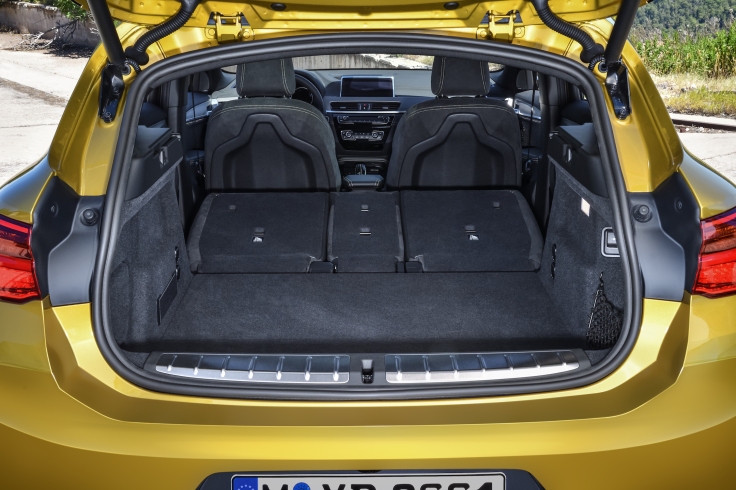 Also, the test car came with its most controversial feature: $550 “Galvanic Gold” metallic paint. Comments ranged from people who though it stood out beautifully to others who said it looked hideous. It reminded a few of early BMWs that came with orange paint jobs.

In today’s marketplace, it’s not difficult to find a crossover roughly the same size as the X2. With customers and manufacturers abandoning sedans, there are many good choices across the board, from small  vehicles like the Honda HR-V and Jeep Renegade to big, three-row crossovers like the Chevrolet Traverse and Audi Q7.

However, if you can afford it and your choice is a sports car in semi-crossover guise, the BMW X2 certainly is worth a test drive. The only drawback from an enthusiast’s point of view is that there is no manual shifter available.