Without any modification, the 2017 Subaru Crosstrek could tie itself in NOTs. But it’s a good thing.

It’s NOT a sport utility vehicle, despite its generous ground clearance and all-wheel drive.

It’s NOT like other crossover SUVS, which come with front-wheel drive and charge extra for all-wheel drive. On the Crosstrek, AWD is standard.

It’s NOT a blazing performer, with a zero to 60 mph acceleration time of around 10 seconds.

It’s NOT what you’d call luxurious or stylish. Think serviceable.

It does NOT have a conventional engine and transmission.

None of the NOTs is a negative. Take the last item. The Crosstrek, like other cars and crossovers from Subaru of Japan, gets its power from a horizontally-opposed engine, also called a boxer or flat engine.

A boxer engine provides a low profile because its cylinders lie flat, or horizontally, feet to feet on both sides of the crankshaft, instead of standing upright or leaning as in V6 or V8 engines. That squat attitude delivers a lower center of gravity, contributing to improved handling by making the vehicle less inclined to tip.

Boxer engines were used exclusively in Volkswagen Beetles from the 1930s until the 1970s. Today, they are the engines installed in Porsche sports cars like the 911 and Cayman.

With the unconventional engine, the Crosstrek is equipped with a continuously variable automatic transmission (CVT), a type that is becoming increasingly popular but still is out of the mainstream.

A CVT uses a system of belts and pulleys—or, in some cases, gears—to seamlessly transfer power. There are no shift points as in conventional automatic transmissions; power simply multiplies as the engine revolutions rise.

But Subaru finesses even that. Its CVT can mimic a six-speed automatic transmission with a manual shift mode controlled by paddles on the steering wheel—not unlike those on super sports cars. It introduces a small measure of sportiness into a vehicle that deliberately eschews it.

Subaru has always displayed an uncanny knack for consumer trends. When SUVs started to take off in sales, the company jacked up its Legacy station wagon and created the Outback. After using the concept on other models, it also delivered a purpose-built crossover, the highly acclaimed Forester.

In 2012, Subaru introduced the Crosstrek as a smaller counterpart to the Forester. It was based on the compact Impreza platform and has continued largely unchanged since. 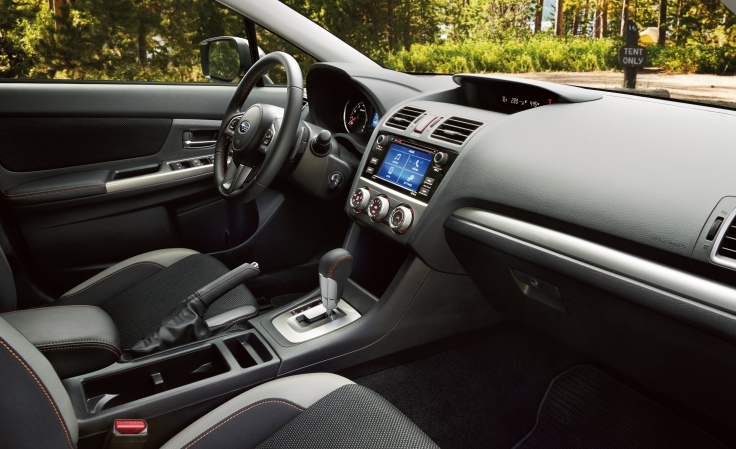 Despite increasing competition as other manufacturers have introduced subcompact and compact crossovers, the Crosstrek’s sales have increased stealthily and steadily, and are on a pace to reach around 90,000 this year.

The Crosstrek’s price starts at $22,570. Tested for this review was the top-line Limited model, which had a starting price of $26,070. With options that included Subaru’s EyeSight driver assist system, navigation, pushbutton starting, a motorized sunroof, and SXM satellite radio with travel and traffic links, the bottom line sticker came to $28,965. That’s a bump of just $125 over the 2016 model.

Power comes from a 148-hp 2.0-liter four-cylinder boxer engine that delivers 145 lb-ft of torque. With the CVT, it is something of a slug when you get your foot in it off the line. But this is not a vehicle to engage in stoplight drag races.

Drive normally in modern, impossibly congested rush hour traffic, and you won’t notice much difference between the Crosstrek and, say, the Porsche Cayenne.

That’s the conundrum of this automotive era: the vast amount of anyone’s time behind the wheel will be in traffic, not joyfully hammering a sports car around curves and switchbacks on a mountain road. Soon, when driverless cars take over, even that may be a candidate for requiescat in pace.

Meanwhile, the Crosstrek is a vehicle to be enjoyed on its own terms. It has comfortable seating for four; as usual, the center-rear passenger gets dissed with a harsh perch, a large floor hump and the intrusion of the center console. Driver’s seat adjustments are manual with no lumbar support.

Out back, the Crosstrek offers an unusually large cargo area for this crossover category—a full 22 cubic feet. The second-row seatbacks fold flat for extra stuff.

With an enviable record for durability and reliability, the Crosstrek won’t win many personality contests but has the potential to be a cherished highway companion for many years.