In comedy, politics, vehicles like the 2017 Jaguar F-Pace, and a host of other human endeavors, timing is everything.

The all-new F-Pace, the first ever crossover sport utility from the British manufacturer of performance sedans and sports cars, comes at an opportune time. It is a compact, two-row crossover—a body style that is rapidly eclipsing midsize and compact sedans.

You’d think Jaguar might not need a crossover SUV. After all, the company—now owned by India’s Tata Motors—also produces a full lineup of Land Rover and Range Rover SUVs.

But the two divisions attract different buyers. Land Rover customers, even though they may never take their expensive machines off road, cultivate an image of outdoorsy individualism. Jaguar buyers lean more toward tuxedoed performance on the highway.

The modern Jaguar enterprise has hewed to the performance line, now with three models: XF and XJ sedans, and the exciting F-Type sports car in convertible and coupe versions. For 2017, they are joined by the new F-Pace and XE compact sedan.

It doesn’t take a two-by-four to the backside of any automobile executive to discern that customers can’t get enough of crossovers. Across the price board, they are taking over.

Porsche, the storied German maker of ultra performance sports cars, is a prime example. Its current best sellers are both crossovers: the Macan in the compact category and the Cayenne midsize. Jaguar executives expect that before long the F-Pace will become the company’s best seller.

The F-Pace is aimed directly at performance crossovers from other luxury manufacturers, including the BMW X3, Audi Q5, Mercedes-Benz GLC, Lexus NX, Acura RDX, Volvo XC60, and even the Porsche Macan and oddly-shaped BMW X4.

There are five trim levels, including Premium, Prestige and R-Sport types.

The gap between the 35t and S versions is a whopping $14,310, with the difference accounted for by equipment and engine power. Though the 35t delivers 340 hp from its supercharged 3.0-liter V6 engine and the S makes 380 hp, the perceived performance is similar.

According to Jaguar’s specifications, both models have a top speed of 155 mph. The S accelerates to 60 mph in 5.1 seconds and the 35t gets there in 5.4 seconds. The transmission is an eight-speed automatic that can be shifted manually.

On the road, with either of the gasoline engines, the F-Pace delivers a quiet cabin, comfortable ride, responsive handling, good steering feel in a straight line and competent braking. Though road-oriented, it has some boondocks chops as well, including an off-road cruise control called “progress control” from Land Rover that maintains speeds up to 19 mph.

Jaguar expects the 35t to account for about 60% of sales, with the diesel at 15% to 20% and the S taking the remainder. The diesel should be a decent performer, but test models were not available initially.

Driven for this review was a 35t Premium version with a bottom line sticker of $49,495. That covered a modest list of options, including a navigation package, satellite radio, 19-inch alloy wheels and metallic paint in British Racing Green. Also driven: an S model with $13,740 of extras and a $71,435 price tag.

Even with all the technology, driver assistance, comfort, convenience and luxury upgrades, the F-Pace exudes an aura of simple, understated elegance. Surroundings are crafted in high quality leather and wood, with comfortable, supportive seating and controls that are easy to use. However, the navigation system requires a good bit of instruction to use easily.

For all of its luxury orientation, the F-Pace delivers practicality as well. The area behind the second row delivers 33.5 cubic feet of cargo space with tie-downs built into the floor. A compact spare tire resides under the floor. Drop the rear seatbacks and the cargo volume increases to 63.5 cubic feet.

There’s decent back seat comfort for two average-sized adults. But despite five seatbelts, the F-Pace is a four-passenger vehicle. The center-rear position is hopelessly compromised by a large floor hump, hard seat cushion and the intrusion of the center console. Other shortcomings: flimsy sunroof shade and sun visors that don’t slide on their support rods.

Overall, the F-Pace merits serious consideration among its competitors. 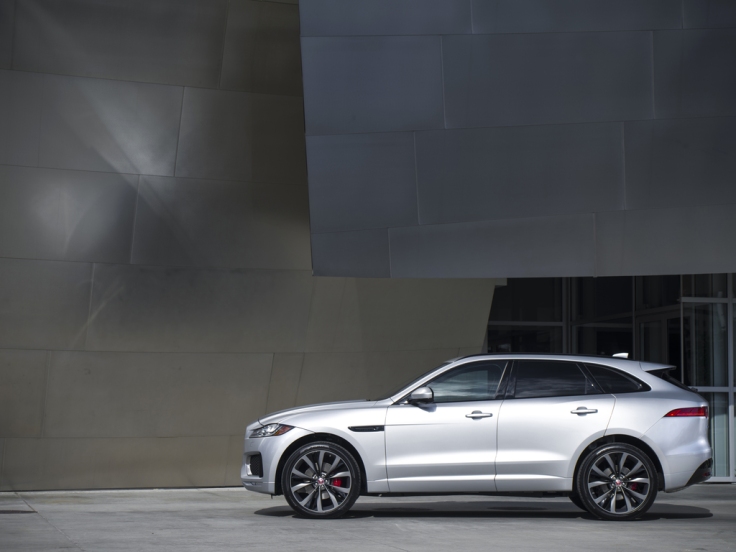