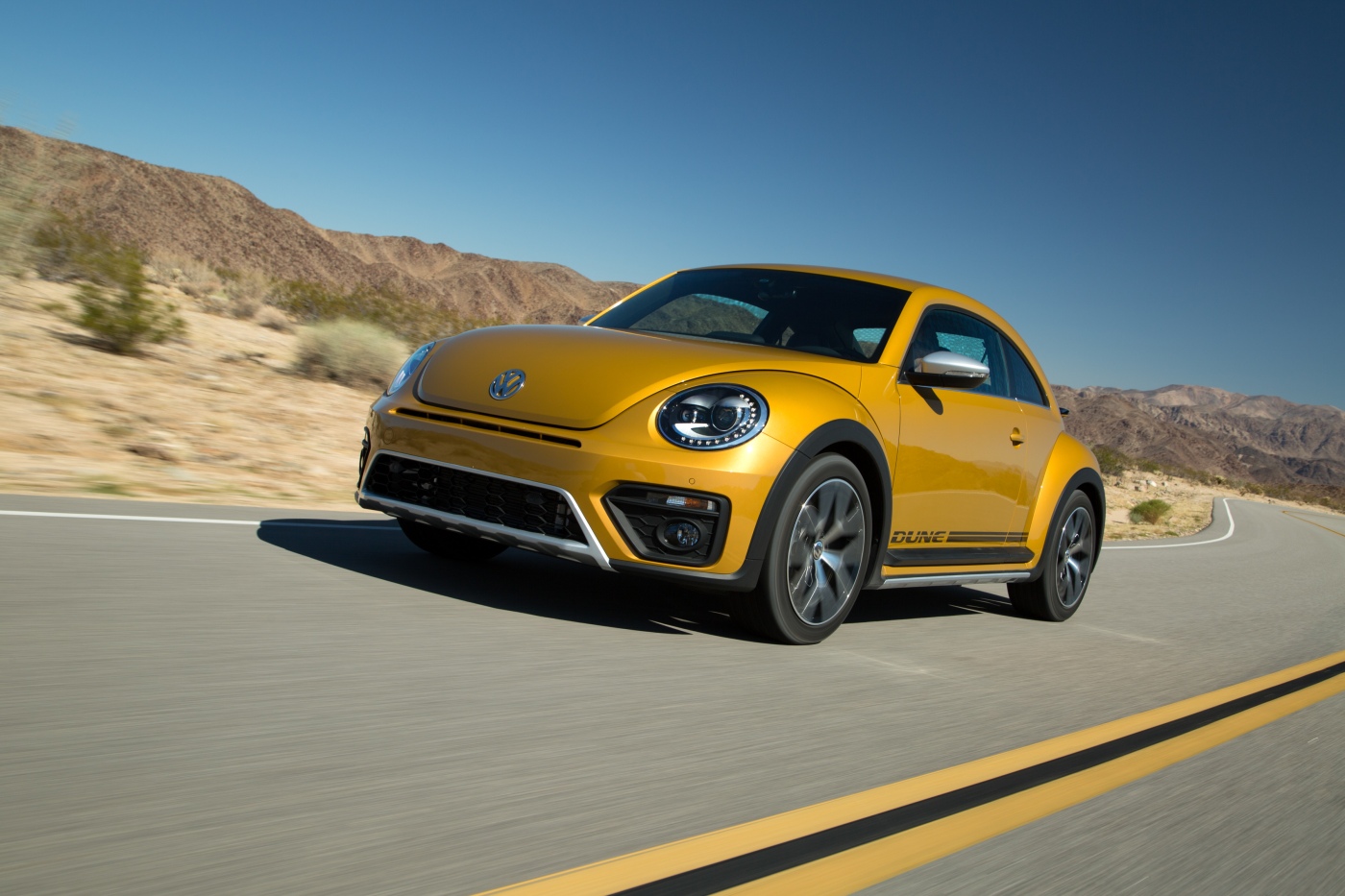 The 2016 Volkswagen Beetle Dune has nothing in common with Frank Herbert’s fantasy novel and its scary giant sandworms. But the stylish makeover of VW’s Beetle should worm its way into the affections of Beetle buffs.

It’s a proven technique in the automobile biz. When a given model has been around awhile and familiarity begins to breed indifference, manufacturers dream up newbies. They rearrange options lists, lower prices, invent new names, and add equipment and colors so the vehicle appears fresh and new.

Volkswagen has been particularly adept at such spinoffs, especially with the Beetle, which was resurrected in 1997 as the New Beetle, a front engine, front drive two-door instead of the original rear engine, rear drive Bug. It has since formed the foundation for many special editions and, in 2011, the company dropped the “New” designation to simply keep it the Beetle. 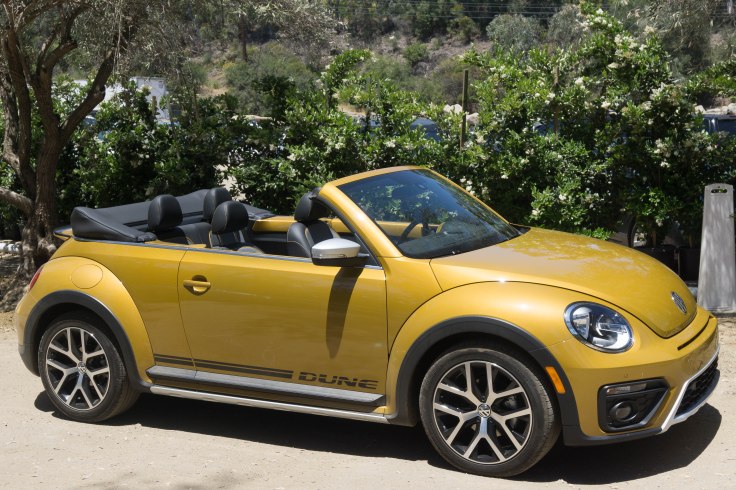 The Beetle Dune actually amounts to a bit more than options shuffling. Inspired by the Baja 1000 off-road adventure in Mexico’s Lower California peninsula, it can boast of some miniscule boondocks credibility—a slightly wider stance and a bit of extra road clearance.

But in the end it’s all about styling. From one perspective, the Beetle Dune mimics a high-powered Porsche race car overtaking you on the road. At the same time, it resembles a customized dune buggy. So it has both curb- and sand-blaster appeal. Even if you don’t like the look, you have to concede that it has personality and panache.

What it doesn’t have is a pit stop full of performance. Other than its arresting looks, the Beetle Dune is, well, a regular Beetle. That means it comes with a 170 hp, 1.8-liter four-cylinder engine that delivers 184 lb-ft of torque to the front wheels through a six-speed automatic transmission.

A manual gearbox would be more attractive to enthusiasts who like the control and driver involvement that comes with shifting for themselves. But VW goes with the flow, recognizing that the automatics obviously have wider appeal. In the U.S., stick shifts have diminished to less than 4% of total new car sales. 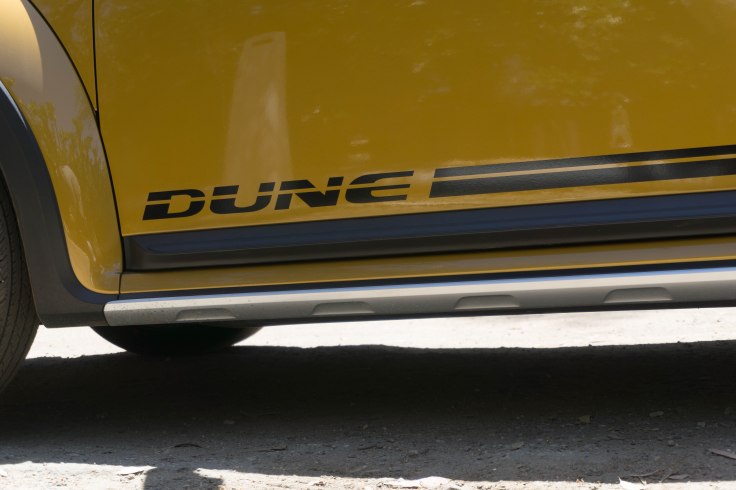 However, the Dune’s automatic comes with driver selectable Sport and Manual modes. In Sport, the onboard computer holds each gear to higher rpms before upshifting. Car and Driver magazine clocked a respectable 0-60 mph acceleration time of 7.4 seconds.

What the Dune excels at is respectable road manners. The steering delivers responsive feedback while the suspension system, body rigidity and tires keep everything planted around corners. Though the tradeoff favors handling, the ride is supple and reasonably comfortable in most situations.

The Dune, like other Beetle versions, is available as a two-door hatchback—tested here—or as a two-door convertible. In the hatchback model the rear seatbacks fold flat to double the cargo space from 15 to 30 cubic feet.

There’s no pretense of a fifth seat. The Dune is a four-passenger car with adequate but not generous rear seat room for regular sized adults. On the plus side, the manually operated front seats slide back and forth to ease access to the back seats.

The same cannot be said for the sun visors. On the driver’s side, the visor slides on its support rod to fully block sunlight from the side. But the passenger’s sun visor does not slide, perhaps saving Volkswagen a buck per car. 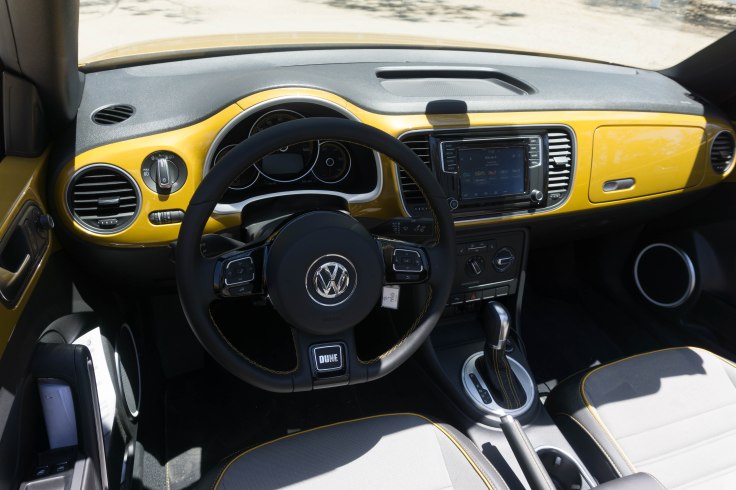 The yellow paint theme, which borders on orange, carries over to the interior, where the seats are crafted of quality cloth with stylish vinyl trim and gold stitching. All seat adjustments are manual but there are enough to of them accommodate almost anyone. They provide good support for long distance cruising.

The technology package included a motorized sunroof, automatic climate control, a Fender premium audio system and keyless access with pushbutton starting. Though the glass sunroof is large, it only opens about half way. 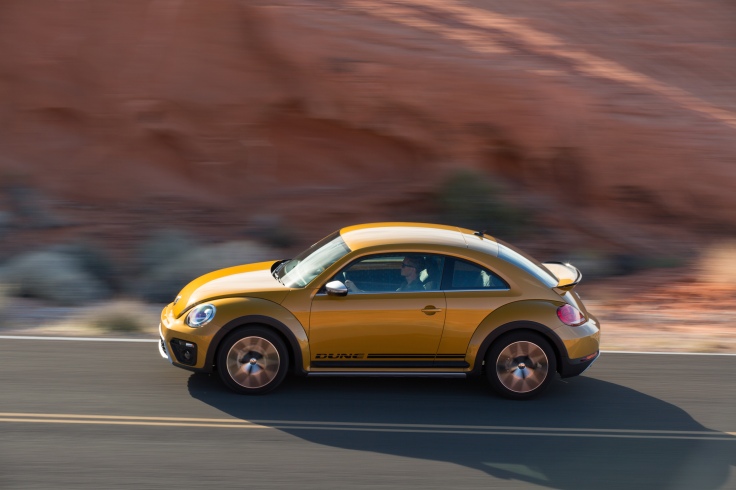