Purposeful people who save rubber bands and prefer practical automobiles also should have access to motoring exhilaration if they want it, which is the reason for the 2016 Audi RS7 Performance hatchback sedan.

This is a rip-roaring, expensive sports car loaded with adrenalin-inducing super-car credentials. Its sensuous lines define what used to be described as a torpedo body but now is called a four-door coupe.

Yet it has a hatchback and flip-down rear seatbacks that makes it as useful as a Prius or Mazda3. It carries four people—there’s no pretense of a center-rear seat, which wouldn’t work anyway because of a big floor hump. So the middle is occupied by a fold-down armrest with cup holders and storage.

There’s decent elbow and knee room, though a six-footer with a three-foot torso will head-bump the roof. With the seats up there’s nearly 25 cubic feet for cargo; drop the seatbacks and the space nearly doubles.

The RS7 Performance is as luxurious as anything out there, as well it should be given its $129,925 base price and, in this iteration, a $140,850 bottom line sticker. It represents the pinnacle of Audi’s low-rider streamlined series, which also includes the A7, S7 and RS7. 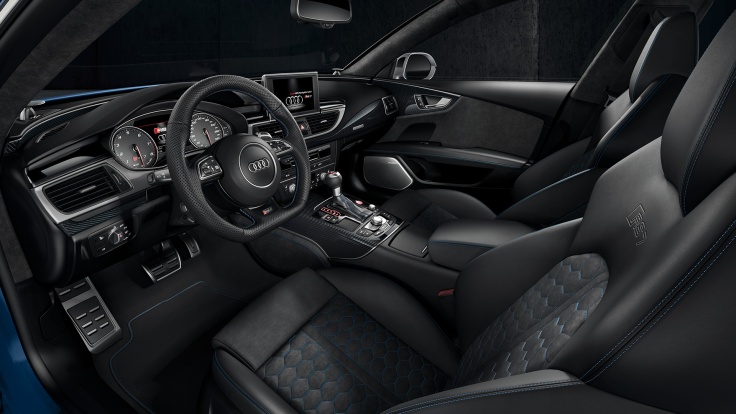 There’s also a diesel V6 engine available for the A7. It’s a 3.0-liter turbo V6 with 240 hp and 428 lb-ft of torque. All 7-series Audi models get the power to all four wheels through an eight-speed automatic transmission with Audi’s Tiptronic manual shift mode.

But the Big Daddy, the subject here, is the new RS7 Performance. Its turbocharged V8 supplies a whopping 607 hp with 553 lb-ft of torque, which rocketed a tester to 60 mph in 3.3 seconds in an instrumented test by Car and Driver Magazine. Top speed—not that anyone short of a skilled driver on a closed course could attain it—is 190 mph.

The numbers don’t tell the story. The RS7 Performance has two drive modes: automatic and sport, which also includes manual shifting via paddles on the steering wheel.

In the automatic setting, the experience is quiet and velvety, as if the car were a boulevardier to chauffeur well-dressed friends to a fine restaurant.

But that’s not a tenth of what’s available. Flick the shifter into the sport mode and punch the pedal. It’s instantly scary; your head snaps back and you feel as if the car wants to rocket from under you and suck you into the back seat.

Don’t bother with the shift paddles. German engineers don’t trust you anyway. You can select a gear and the computer will alter it depending on the circumstances. So sit back and work your right foot.

Lift off the throttle and the exhaust alternates between blats and burbles, as if you were downshifting for a racetrack corner. Your head jerks forward when you lift off the pedal without touching the brakes. 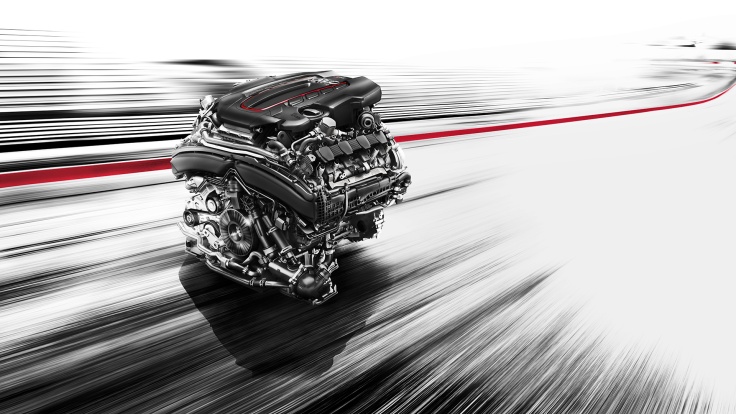 Ah, the brakes. They’re gigantic, with the discs filling the space behind the open 21-inch alloy wheels. They’re of the no-fade ceramic species that inhabit race cars and can slam to a panic stop in an instant or creep up to a traffic light with imperceptible ease to coddle a queen or princess.

The adjustable ride is supple in the European manner with cushy comfort taking a back seat to superb handling, abetted by Audi’s famed quattro all-wheel drive, which is omnipresent but never intrusive.

On the luxury front, the RS7 Performance’s interior is quintessentially Audi, which enjoys one of the best reputations in the motoring firmament for simple, quality design. You settle into seats of quilted leather with white stitching that have firm lateral support and superior comfort. But without perforations the seats are heated but not cooled.

So if Charlie the neighbor sniffs at your precious ride, you can always point out that its hatchback design can help him move that side table.