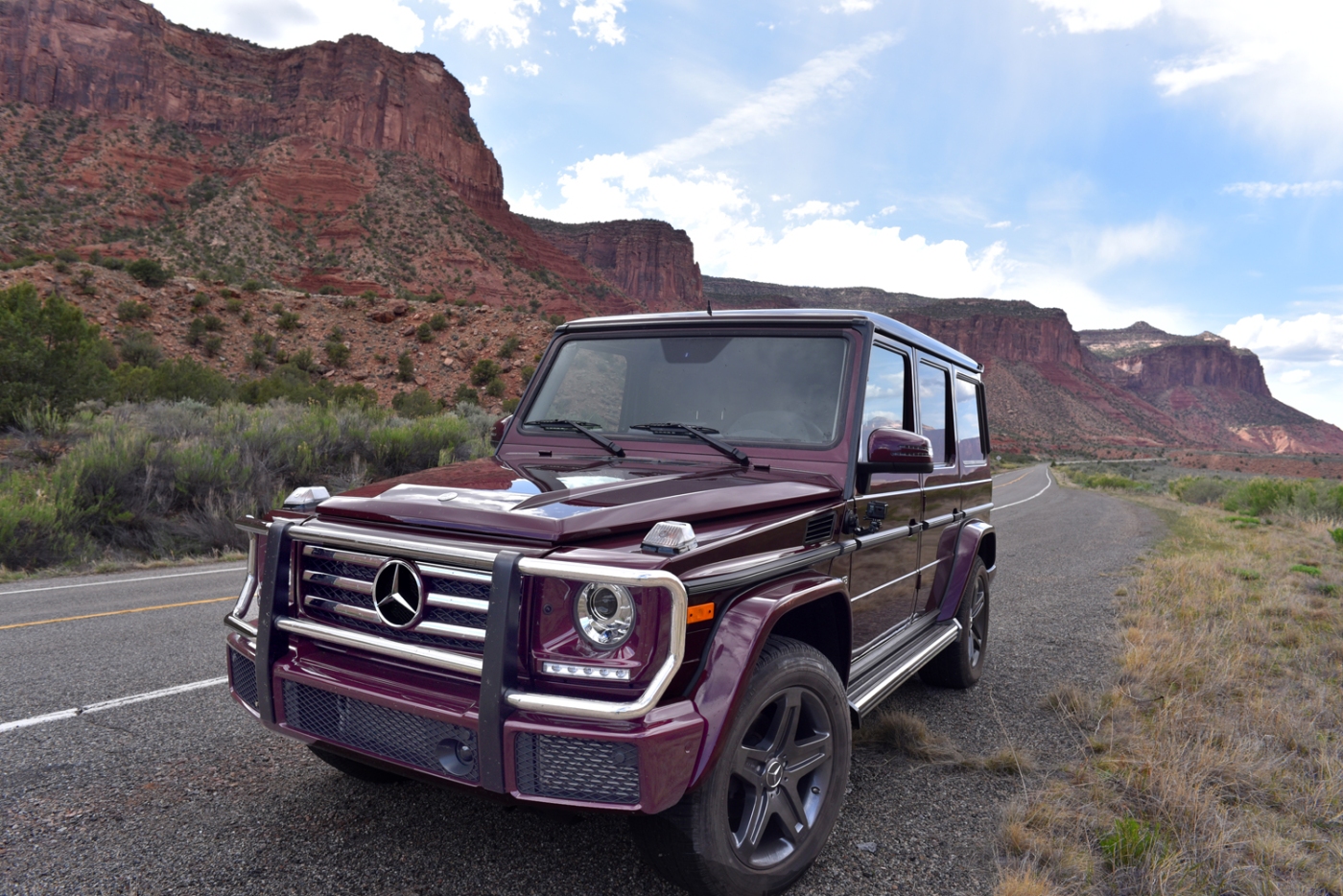 Words and Photos by Tod Mesirow

There’s a certain skill to celebrating aspects that some may not view as positive. It’s not a problem, it’s an opportunity; those blue jeans aren’t ripped and torn, they’re vintage; it’s not a design that’s basically unchanged since its inception, it’s timeless.

Witness the Mercedes G-Class SUVs.  On their website they talk about the 37-year evolution of the vehicle, which is interesting, because while there have been some technological upgrades, the thing that makes these vehicles distinctive is that their appearance has hardly changed at all over the decades, from the time the Shah of Iran, a major shareholder, suggested Mercedes build the vehicle – according to Top Gear and others.  And while bigger, more powerful engines and better brakes, satellite radio, nav systems and the like may qualify as a veneer of evolution, the Geländewagen, which means “cross country vehicle,” often shortened to G-wagon, drives more like a relic than a modern SUV. Its height and boxiness are hard to overcome no matter how much technology or how big an engine is stuffed inside. 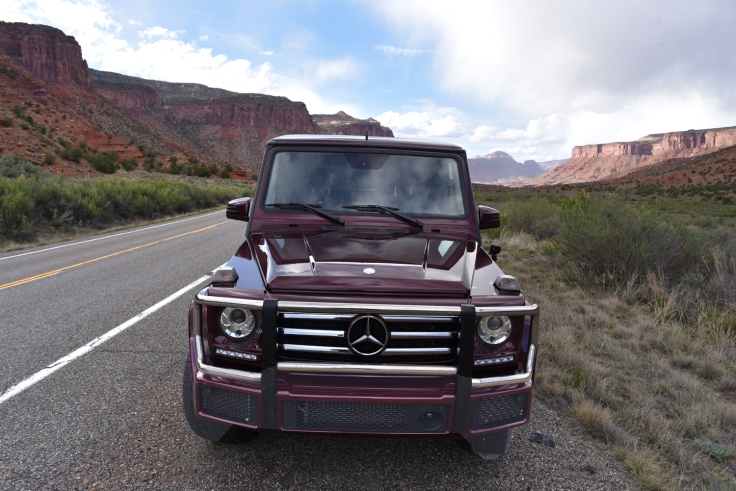 Stuffing is exactly what the AMG folks did to fit a biturbo V12 that churns out a crazy 621 horsepower under the G-wagon’s small hood. Which gives the AMG G65, the top of the line, some serious raw power, and also may help justify the $217,900 sticker.

Mercedes suggests that their main competitors for the G-class are the Land Rover Range Rover and the Toyota Land Cruiser.  But with the Toyota at $83,825 and a V8 producing 381 horsepower it doesn’t feel like a real hoof to hoof comparison.  Even the starter G-wagon, the G550, at $119,900 with a V8 that puts out 416 horsepower feels like a different type of vehicle. The Land Cruiser is a thoroughly modern vehicle that’s been through several top to bottom redesigns, unlike the G-wagons.  The Range Rover’s biggest engine is a 550 horsepower supercharged V8 and the base model with a smaller engine starts at $85,945. Again the whole Land Rover lineup has gone through many iterations of design and engineering over the years and the ones I’ve driven feel like modern vehicles.

Gas mileage is as what might be expected – the G550 hits 13 mpg in the city, and climbs to 14 on the highway. The AMG G63, which is a biturbo V8 producing 563 horsepower drops to 12 in the city, but also achieves 14 on the highway.  It lists at $139,900, not that crazy a jump from the starter G550 considering the engine is hand built, by one person, and adds almost 150 horsepower. The top tier AMG G65 is rated at 11 city, 13 highway. Impressive engineering, actually, to add that much horsepower and maintain an almost equivalent level of fuel economy.

Driving the G-wagons is an event.  And maybe that’s part of the appeal. They’re all tall – at least 76.3 inches, or six feet four inches plus a little.  The starter G-wagon is actually 76.9 inches tall. The full-sized Mercedes SUV line of GLS’ tops off at 72.8 inches. The Toyota Land Cruiser is 74 inches tall, a Land Rover Range Rover 72.24. Stepping up in to one is more like ascending than simply entering, like climbing into the saddle. Maybe that’s why Mercedes held their event in western Colorado, and offered the assembled journalists the chance to ride a horse to dinner.  In direct opposition to the “here are the keys go have fun on these amazing roads” that is the hallmark of an opportunity like what we were offered by Mercedes during the day, the cow folk (hard to call them cowboys and cowgirls – though that does match the anachronistic vehicle) were pretty strict in their instructions to us car folk to only WALK the horses.  Automatic transmission animals, after a fashion, with only one speed.

Whether I was driving the G550 or the AMG G65, the G-wagons felt top heavy.  It’s fun to be high above the earth, propelled by so much horsepower, but heading in to a curve it’s impossible not to lean your body away from the outside of the curve, as the G-wagon leans out from the turn. I’m on the tall side at 6’ 4” and there was barely enough room for me behind the wheel. Not quite the luxurious stretching opportunity presented by other SUVs. But again, it’s part of the deal with the G-wagons – I’m on patrol, at full alert, ready for any apocalyptic event. The driver’s seat feels more like a cockpit, and despite all the modern technology added to the G-wagons there’s an inescapable sense of driving something that’s more of a tribute to the past than a fully modern vehicle. 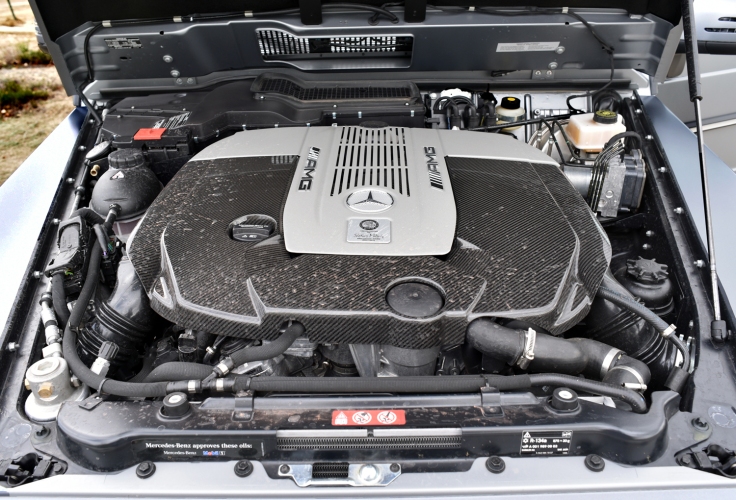 I was curious to see how the wizards at AMG – and they are wizards – were able to fit a biturbo V12 in the tiny front engine compartment. It took a bit more than muggle technology. Mash on the accelerator and the G65 takes off like a shot – square shaped and all, the lack of aerodynamics not withstanding – rapid acceleration achieved not through body shape but by brute force alone.

Which is part of the appeal. The G-wagons are expensive, distinctive, and a throw-back, with exhaust pipes peeking out of the sides of the vehicle at the rear edge of the rear doors. They’re a statement. They say “I’m kind of old school but I like all this new-fangled technology tossed on for good measure.” If you’re willing to trade the full complement of a truly modern vehicle for a pastiche of old and new – and you can absorb the price tag – then you are a G-wagoneer.  Giddy up. 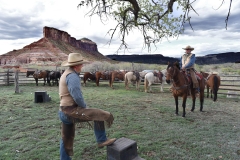 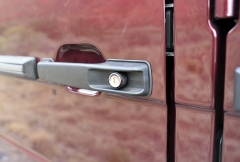 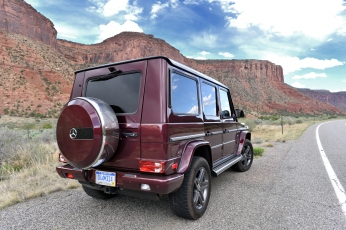