In its opening weekend, the new Star Wars movie “Rogue One” dominated box offices with $155 million in ticket sales. Nissan hopes the Force will be with its namesake, the 2017 Nissan Rogue crossover SUV.

The movie came along at an opportune time, which Nissan seized. It trimmed up a 2017 Rogue, mainly with logos, badges, decals and black paint, cut a deal with the movie producers and introduced it at the Los Angeles Auto Show as the Star Wars Rogue One Limited Edition. 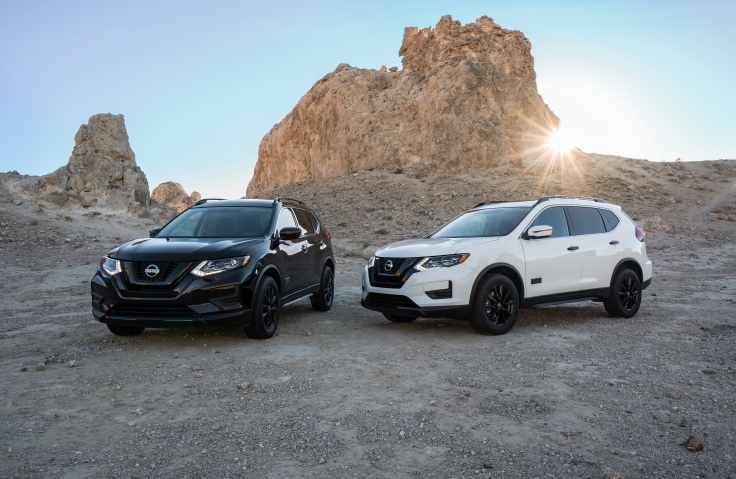 Based on the Rogue’s midlevel SV version, the Star Wars model comes only in Glacier White or Magnetic Black. There’s a charcoal interior and Limited Edition floor mats along with Rebel Alliance and Galactic Empire cup holder inserts, among other fillips. Production is limited at 5,000 U.S. units and the price works out to $33,920. Buyers also are entitled to a replica Death Trooper black helmet.

Actually, the Rogue has been doing quite well without venturing into the cosmos. It now is the best-selling vehicle in the Nissan lineup, totting up 329,904 sales in 2016. It now parks in third place among compact crossovers behind the Honda CR-V (357,355) and Toyota RAV4 (352,154). 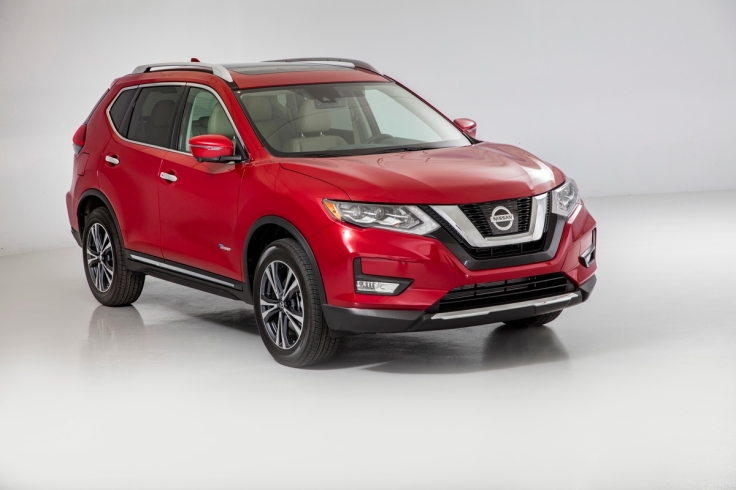 Also new for this year is a Rogue Hybrid, the subject here. It joins the Rogue’s other models: S, SV and SL, in front-wheel drive or all-wheel drive. Non-hybrid models offer optional third-row seats to boost the accommodations to seven passengers. The Hybrid’s battery pack nestles under the cargo area, precluding a third-row seat. 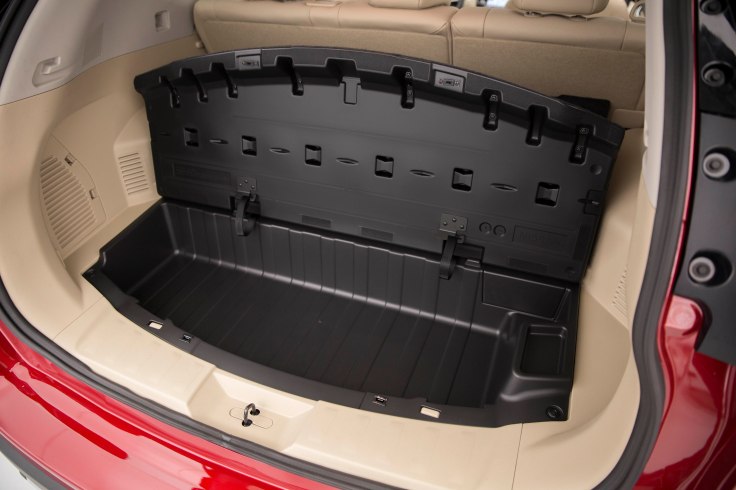 Because of the batteries, the cargo floor is raised a couple of inches. But there’s still a generous 30 cubic feet of space. Outboard second row seats deliver ample head and knee room, and even the center position is usable. Seatbacks fold down for additional loads.

Like most hybrids that are not super-performance cars, this new Rogue’s strong suit is fuel economy. It links a 2.0-liter four-cylinder gasoline engine with a 30-kWh electric motor. Together, they deliver 176 horsepower and EPA city/highway/combined fuel consumption of 33/35/34 mpg in the tested front-drive version. The front-drive gasoline model is rated at 26/33/29 mpg. 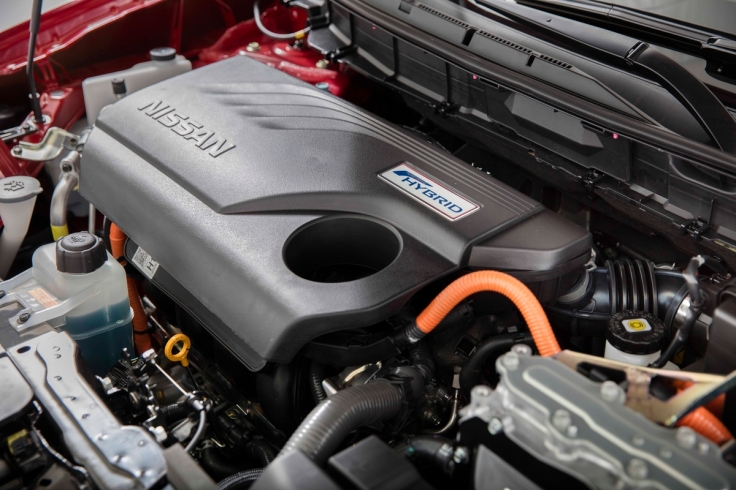 Like other Nissans, the Rogue Hybrid sends its power to the wheels through a continuously variable automatic transmission (CVT), which uses a system of belts and pulleys to seamlessly multiply gear ratios and transfer the engine’s power without the shift points of a traditional automatic transmission.

Nissan has extensive experience with CVTs connected to engines of different power and has largely eliminated characteristics that have prompted criticisms, like a noisy sensation that the transmission is slipping. 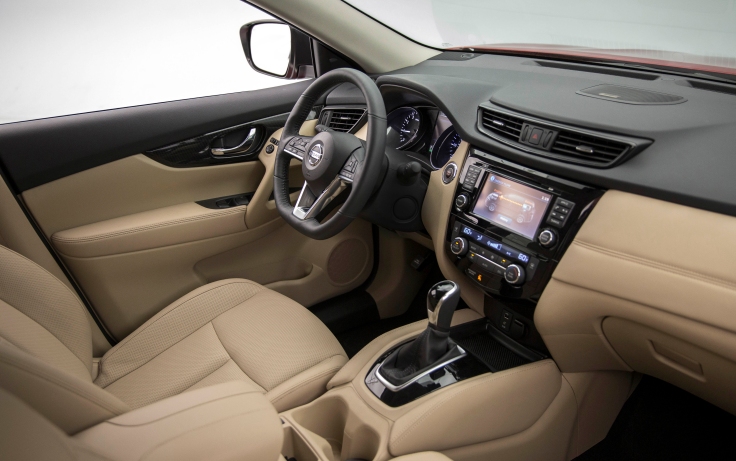 However, Nissan finesses even minor criticisms with computer programming that mimics shift points under hard acceleration or when manually shifting the CVT. On the Rogue Hybrid, there’s also a Sport mode that holds the shift points to higher engine revolutions for better acceleration, which of course guzzles extra gasoline.

Like other hybrids, the Rogue can be driven for short distances on electric power alone. But the gasoline engine soon kicks in for hybrid driving. It also employs an automatic stop-start system to contribute to fuel economy.

As a result, there’s a bit of hesitation off the line when the driver punches the throttle. Once underway, the Rogue Hybrid feels strong and has no problem keeping up with traffic, though you wouldn’t want to engage in many stoplight drag races. 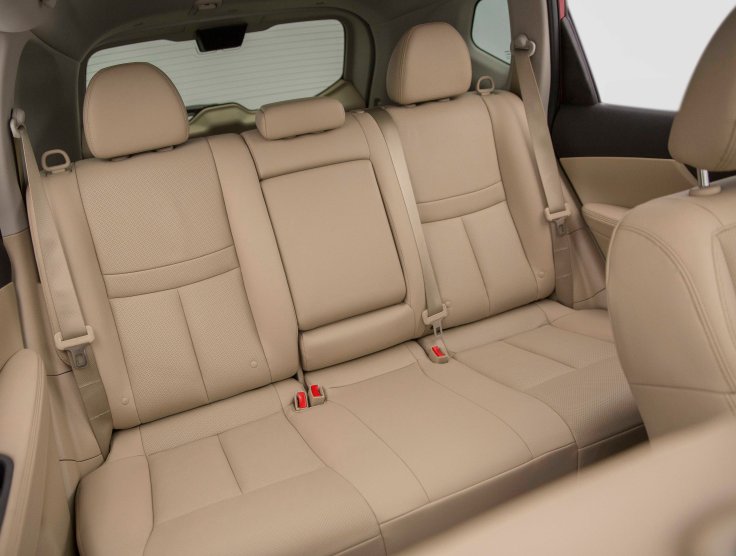 Overall, this hybrid doesn’t feel much different from its internal combustion counterpart, mainly because its gasoline engine runs most of the time. It cruises comfortably and quietly, with a ride that’s a touch on the soft side, and tracks truly on straight roads. There is a bit of body lean on curves but nothing that causes anxiety as long as you slow down.

In the compact crossover SUV category, there currently is only one other hybrid competitor: the Toyota RAV4. 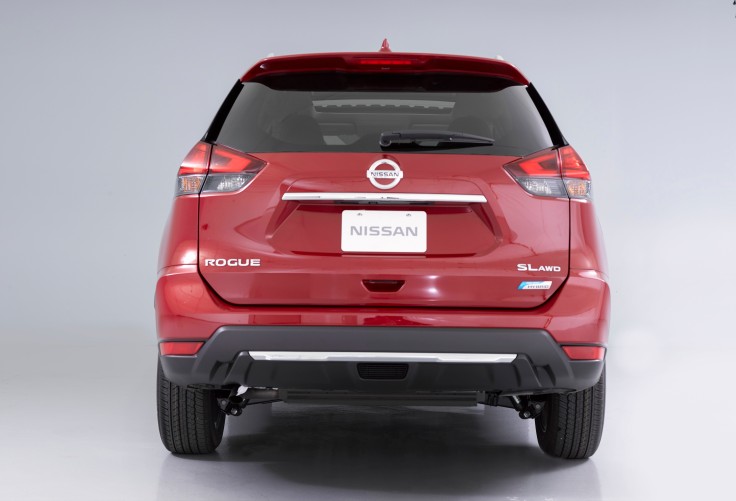 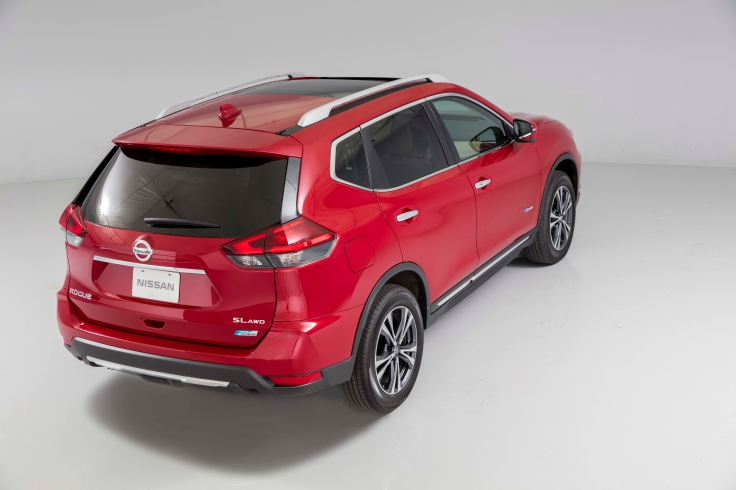 Nissan Rolls Out “The Year of the Truck” and More: A DriveWays Review… 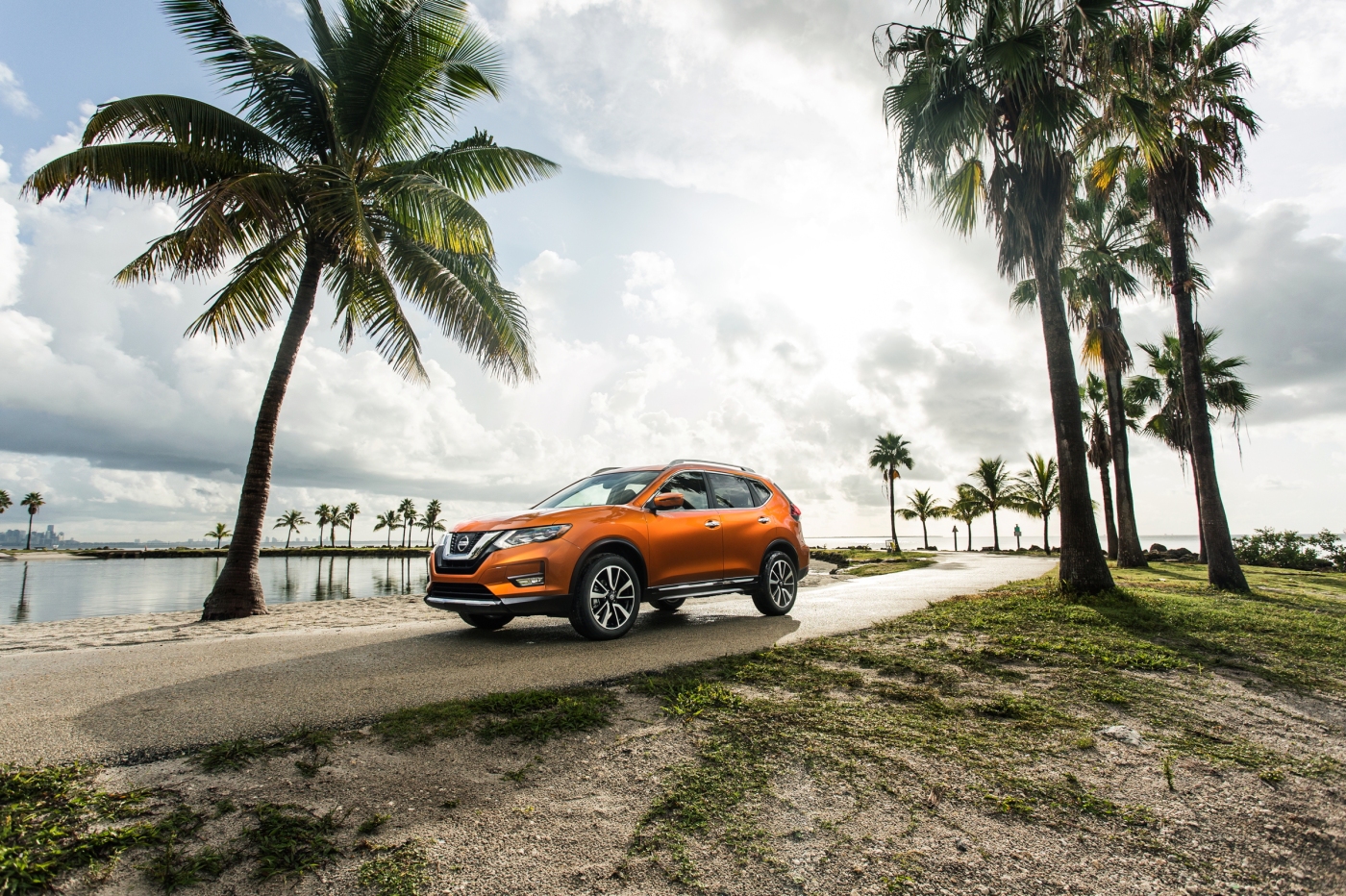 With a quick preview at the Miami Auto Show of its 2017 Rogue crossover utility vehicle and a high-performance version of the 2017 Sentra compact sedan, Nissan delivers the automotive version of the full court press.

The two new vehicles arrived after the Tennessee-based Japanese manufacturer, as part of its self-declared “Year of the Truck,” introduced three other 2017 models bumper on bumper: Armada SUV, Pathfinder crossover SUV and Titan half-ton pickup truck. It’s a market onslaught rarely accomplished by any manufacturer. 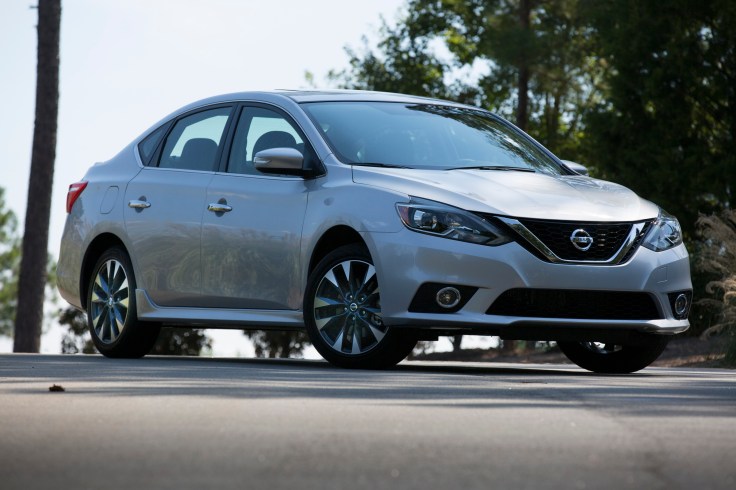 Of the two new machines introduced in Miami, the Sentra SR Turbo will get the juices flowing among budget-minded enthusiasts. It comes with a 188-hp 1.6-liter four-cylinder engine that develops 177 lb-ft of torque.

It is available with what Nissan’s Brandon White called the “millennial anti-theft device”—a six-speed manual gearbox. He was reminding the audience that manual transmissions, already a rarity, may go the way of dinosaurs.

But for the masses, the Sentra SR Turbo also will be available with Nissan’s D-Step continuously variable (CVT) automatic transmission. Ordinarily, CVTs, which use a system of belts and pulleys to multiply torque, have no shift points. The D-Step mimics shift points.

The Sentra SR Turbo is projected to start at less than $22,000, with a no-extra-charge choice of either the CVT or the manual gearbox. It should enhance Sentra sales, which at the end of August were running at an annual rate in 2016 of 233,709.

More important for the company is the new Rogue. As a compact crossover with either front-wheel drive or all-wheel drive, it operates in the currently hottest segment of the market. Nissan expects it soon will become the company’s best selling model. That’s no small change. At the end of August, its sales already were running at an annual rate of 332,740.

To bolster the Rogue lineup even further, the 2017 model will be available, for the first time, as a gasoline-electric hybrid. It uses a 2.0-liter four-cylinder gasoline engine with 141 hp and 144 lb-ft of torque. Using a dual-clutch system, the engine works with a 40 hp electric motor and a lithium-ion battery pack to deliver 176 hp.

To enhance fuel economy, the hybrid also uses a stop-start system and regenerative braking. Nissan estimates the city/highway/combined fuel consumption at 33/35/34 mpg for the front-drive version and 31/34/33 mpg with all-wheel drive.

Though it bears an unmistakable family resemblance to its predecessor and other Nissans, the 2017 Rogue comes with a new front fascia and other exterior styling enhancements, along with an upgraded interior.