Driving the 2017 Mazda CX-5 imparts the distinct impression that this compact crossover SUV filched a few genes from the Mazda Miata sports car.

Given its tall profile and practical family orientation, you don’t expect much in the way of pinpoint handling. True, other compact crossovers do a decent job of hustling around curves, as long as you don’t push too hard. But none do it with quite as much composure.

Sure, it’s not an MX-5 Miata two-seater. Nor will it impress owners with low-slung sports sedans, powerful engines, tight suspension systems and loose principles. But this redesigned offering from one of the world’s more innovative automakers incorporates a nearly anonymous system that surreptitiously enhances the steering.

Basically, what it does is subtly back off the throttle — not so you’d notice it — to produce an ever-so-slight weight shift toward the front wheels. The effect is to tighten the steering response to make it more precise in cornering. Mazda calls it G-Vectoring Control. (Technology nerds can look it up). 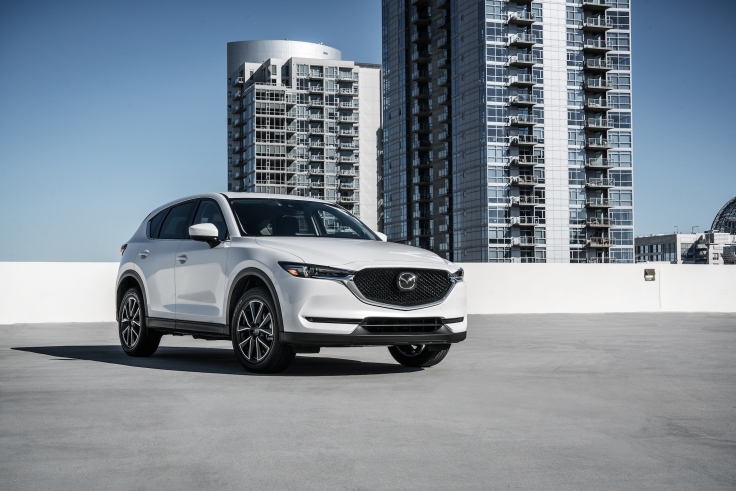 You don’t notice the specifics of this engineering. It is part of Mazda’s SkyActiv technology, which takes a holistic approach to every facet of vehicle design, right down to designing components that are as little as a few ounces lighter to contribute to overall weight reduction.

Likely most casual observers will not immediately identify the 2017 CX-5 from its predecessor. It carries over a family resemblance but adds styling fillips to the grille and headlights as well as sensuous haunches masquerading as rear fenders.

Inside, the engineering elves have installed additional sound deadening materials to muffle unwelcome exterior noises. They also tuned the suspension system to soak up the common bumps and grinds on U.S. roads and highways that have been allowed to fester because of ideological penny-pinching politicians. At least the engineers are doing their best to save motorists’ spines, molars and kidneys.

Aside from the excellent ride, handling and ambience, the CX-5 is no slouch on the performance charts — given its crossover orientation. The 2.5-liter four-cylinder engine delivers 187 hp and 185 lb-ft of torque, most of it usable and delivering 23/29/26 mpg fuel consumption on the EPA’s city/highway/combined test cycle.

The power gets to the pavement through a six-speed automatic transmission that can be shifted manually. However, there are no shift paddles mounted on the steering wheel, as has become increasingly common.

Front-wheel drive comes standard on the CX-5 and is perfectly acceptable for any owner who doesn’t live in chronically crappy weather conditions, of which there are many — and increasing — around the continental United States. If all-wheel drive is preferable, it’s a $1,300 option

There are three CX-5 trim levels: Sport, which has a starting price of $24,985, including the destination charge; Touring, at $26,855; and the tested Grand Touring at $30,335. (Manufacturers like to present their top-line vehicles to testers and critics; only rarely do you get to drive a base model). With options, the tested CX-5 had a bottom-line sticker price of $33,465.

The Grand Touring model, which accounts for about half of CX-5 sales, is lavishly equipped with a power tailgate, leather upholstery, features and trim that would be characteristic of a luxury crossover. However, it does not offer Apple CarPlay or Android Auto.

There’s a head-up display that not only shows the vehicle’s speed but also the speed limit and other functions, including lane departure alert and adaptive cruise control. The display reflects off the windshield, not the small reflective panel used on other Mazda models that rises up out of the dash.

It should be noted that compact crossover SUVs, which are the hottest selling vehicles on the market, are being infected with price creep. Where not long ago you could buy one nicely equipped for under $30,000, they now are more expensive and, in some cases, even popular priced models are approaching $40,000, moving them into luxury territory populated by crossovers from Jaguar, BMW, Mercedes-Benz, Acura, Lincoln, Audi and Lexus. 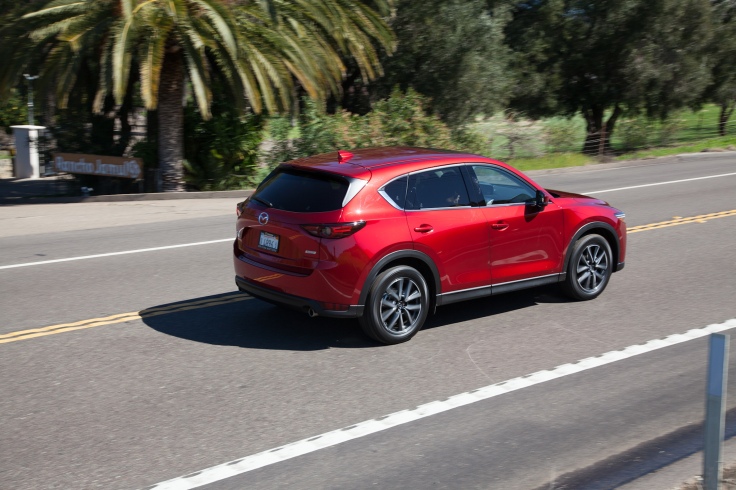