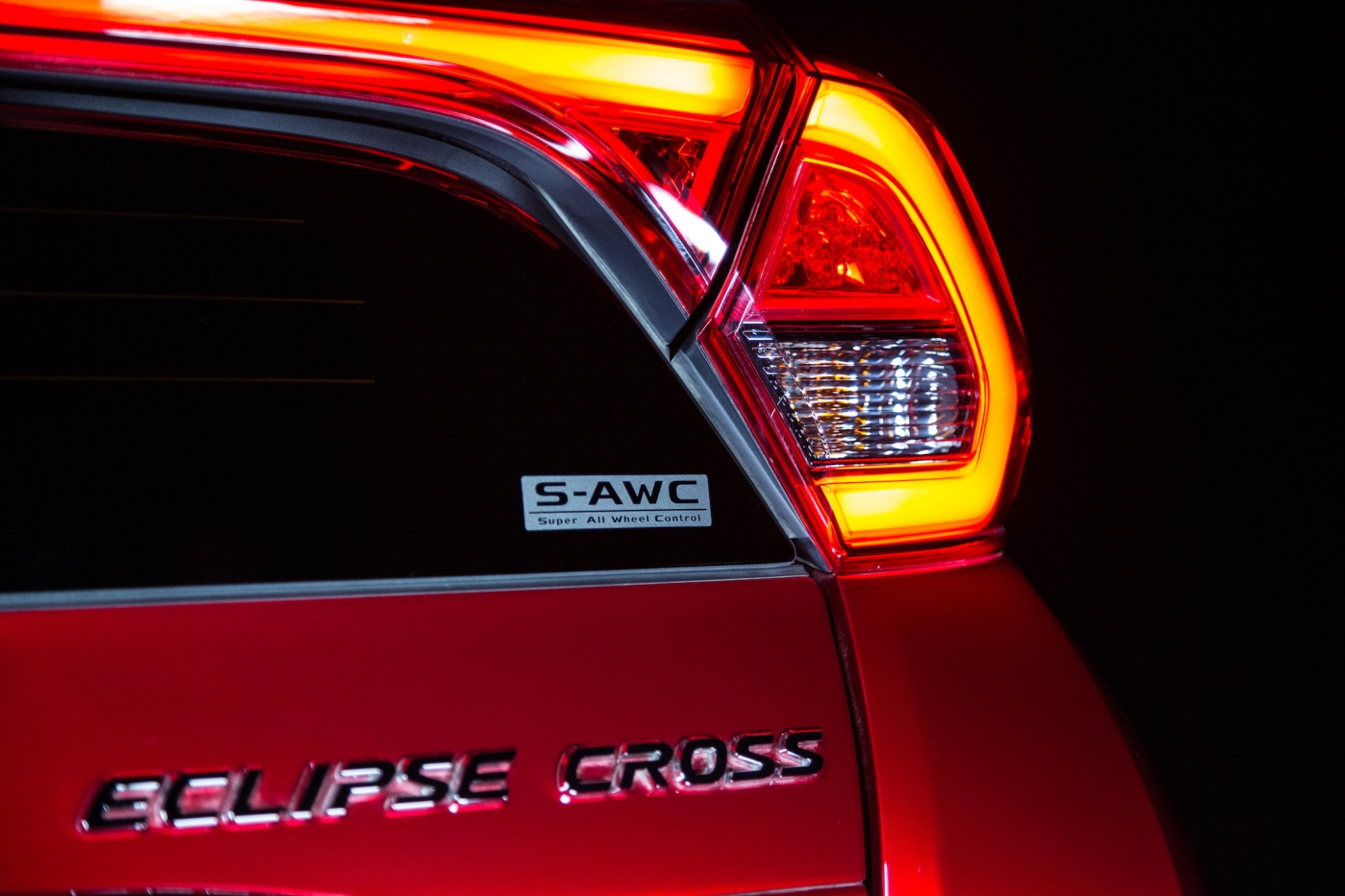 Q: When is an Eclipse not an Eclipse? A: When it’s a 2018 Mitsubishi Eclipse Cross.

Okay. It has nothing to do with the eclipse of the sun that plunged parts of the United States into total darkness on Aug. 21, 2017.

Nope. It’s about an all-new crossover sport utility vehicle from  Mitsubishi of Japan that reprises a name from the past but on a completely different vehicle.

The original Eclipse was a sports coupe and convertible marketed in four different versions over 22 years from 1990 to 2012. For some of that time, Mitsubishi had a relationship with Chrysler, and the Eclipse also was rebadged as the Eagle Talon and Plymouth Laser.
Resurrecting the Eclipse name injects a dose of familiarity into a new vehicle that aims to take advantage of the stampede of buyers to crossovers — at the expense of traditional sedans and station wagons.

Some crossovers are little more than jacked-up hatchbacks with a bit of extra ground clearance and, in most cases, optional all-wheel drive. That’s not the case with the Eclipse Cross, which was designed from the get-go as a crossover with front- or all-wheel drive.

As such, it is an affordable vehicle for singles, couples and small families who seek low-cost wheels with decent cargo space. It also is a tidy package for parking and negotiating urban traffic.

The Eclipse Cross is 14 feet 5 inches long with 95 cubic feet of space for passengers and 23 cubic feet for cargo behind the second-row seats. It has edgy styling, especially when viewed from the rear, which dictates a split tailgate window.

Though that restricts rear vision somewhat, the designers made up for it by installing rear headrests that slide up for passengers and down for a better view behind. The rear seats can be adjusted fore and aft to divvy space between passengers and cargo, and the backs fold nearly flat to expand the cargo area. The cargo floor, which is a tad high, hides a full-size temporary spare wheel and tire.

There are five trim levels, ranging from the front-drive ES at $24,900 to the SEL Touring at $31,390. The base price of the tested SE model with Mitsubishi’s S-AWC electronically controlled all-wheel drive  was $27,390. (The S-AWC, which stands for Super All-Wheel Control, has driver selectable adjustments for snow, gravel and automatic operation). With a few minor options, the tested price came to $27,715.

Power comes from a 1.5-liter turbocharged four-cylinder engine that delivers 152 hp and 184 lb-ft of torque. The transmission is a continuously variable automatic (CVT) with a manual-shift mode.

With such a small engine, expectations were not high. But the combination delivers a strong and sprightly surge off the line, making the Eclipse Cross feel faster than it actually is. Though many critics deride CVTs for a sensation that the transmission is slipping, this one has very little of that. The small crossover cruises happily at freeway-plus speeds, though city/highway/combined fuel economy is just 25/26/25 mpg — likely because the little engine has to work hard. 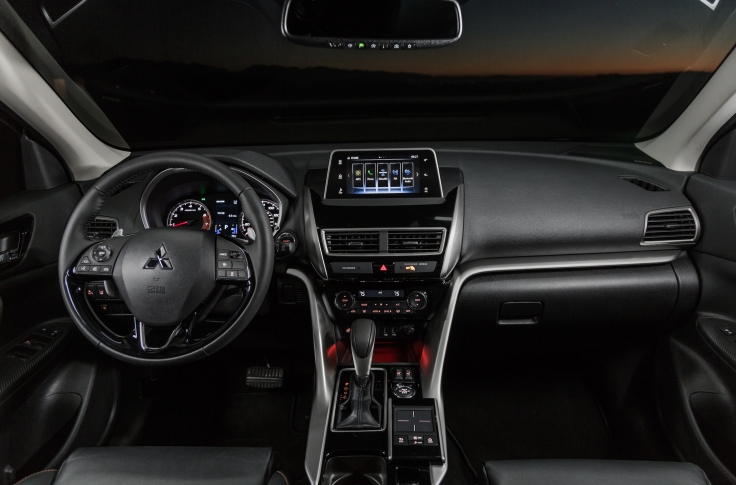 Inside, comfort is first rate. The SE model came with heated and  luxurious cloth seats that were relaxing and supportive, with prominent seatback bolsters to coddle the torso. Seat adjustments were manual but allowed fine tuning. Outboard seats in back are similarly accommodating and even the center-rear position, though less comfortable, is at least usable.

The center touchscreen controls were not intuitive and required close attention to operate, so would be distracting to a driver trying to make adjustments while underway. Better to get things set up before moving off. Though there were remote audio buttons on the steering wheel, there was no volume control knob.

Despite its minor faults and Mitsubishi’s relatively low profile in the U.S., the new Eclipse Cross deserves a look for anyone seeking an entertaining and inexpensive crossover. 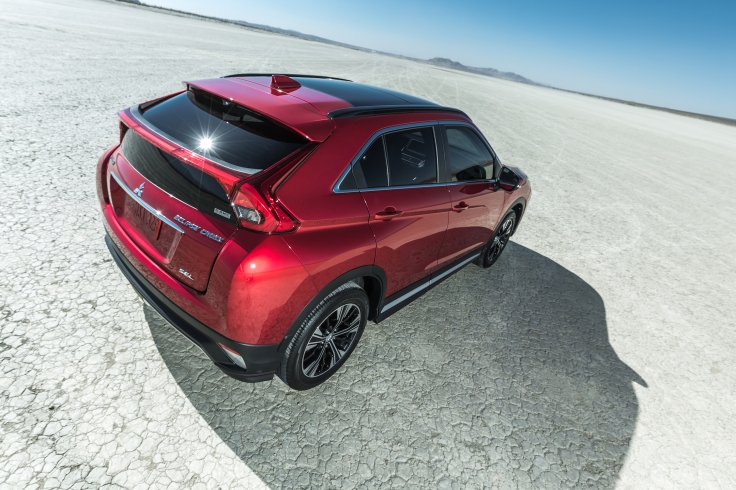 Though not well-known in the U.S., Japan’s Mitsubishi, with its 2018 Outlander PHEV, bows to no automaker in the realm of technological development.

For openers, the plug-in hybrid crossover sport utility vehicle uses a gasoline engine and two electric motors to drive all four wheels. With an app, you can control vehicle climate settings and other functions like battery charging remotely from your smart phone. Communication is direct; a WiFi hot spot is not needed. 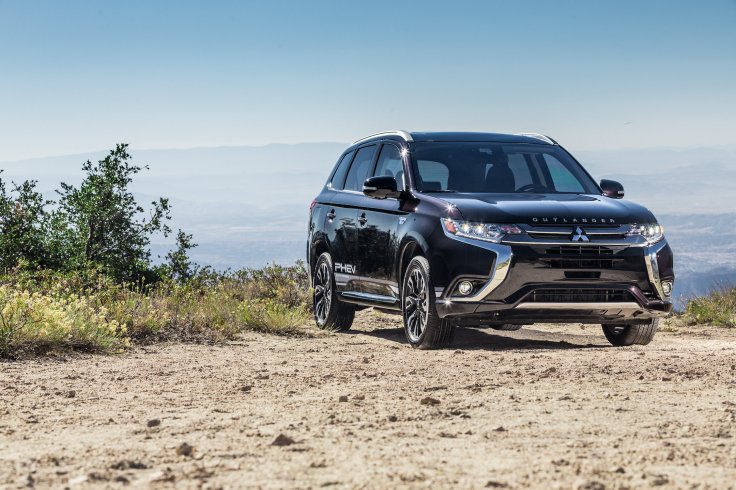 There are two standard 120-volt plugs onboard that deliver 1,500 watts of power from the drive battery, enough to run household appliances like toasters, mixers, small refrigerators, electric grills and coffee makers while tailgating.

Mitsubishi — the name means “three diamonds” — has not been a major player in the U.S. It sells a couple of cars — the Lancer and Mirage — along with two smaller crossovers, the Outlander Sport and Eclipse Cross. It also previously sold an electric car, the iMIEV. Overall sales in 2017 totaled 103,578, the first time in more than a decade that it topped 100,000. That included 35,409 Outlanders, its best seller. The new plug-in should enhance that.

The tester was the top-of-the-line Outlander GT with S-AWC, which stands for Super All-Wheel Control — or full-time all-wheel drive. There’s also a four-wheel drive lock mode that mimics a center differential lock for off-road terrain.

The main engine is a 117-hp, 2.0-liter gasoline four-cylinder that delivers 137 lb-ft of torque. It drives the front wheels along with an 80-hp electric motor with 101 lb-ft of torque.

Driving the rear wheels is another 80-hp electric motor with 144 lb-ft of torque. There’s also a gasoline-fueled generator that boosts the electric motors and helps charge the onboard lithium-ion battery pack, which is mounted under the cabin and does not intrude on passenger space.

Because electric motors deliver their maximum torque as soon as they are switched on, there’s no need for a conventional automatic transmission. It’s described simply as single-speed automatics front and rear.

All of this works seamlessly. The only indication that this is a complicated plug-in hybrid is when you press the ignition button and a dashboard light reads “ready.” On the road, the Outlander automatically cycles among three hybrid modes. The driver also can physically switch into economy, battery-save and battery-charge modes.

The stated range primarily on electric power is 22 miles. But you’ll seldom get that unless you have a feather foot on the throttle. In conventional urban driving, the test vehicle usually delivered less than 20 miles. Overall range — gasoline and electric — is stated at 310 miles. The EPA rating is 74 MPGe, or miles per gallon equivalent in hybrid running, and 25 mpg in gasoline operation.

It takes up to eight hours to the charge the battery pack from a standard 120-volt household outlet. If you have access to a 240-volt charger, it takes about four hours. The Outlander PHEV also is capable of handling a level 3 fast charger, which can deliver an 80% charge in 25 minutes. 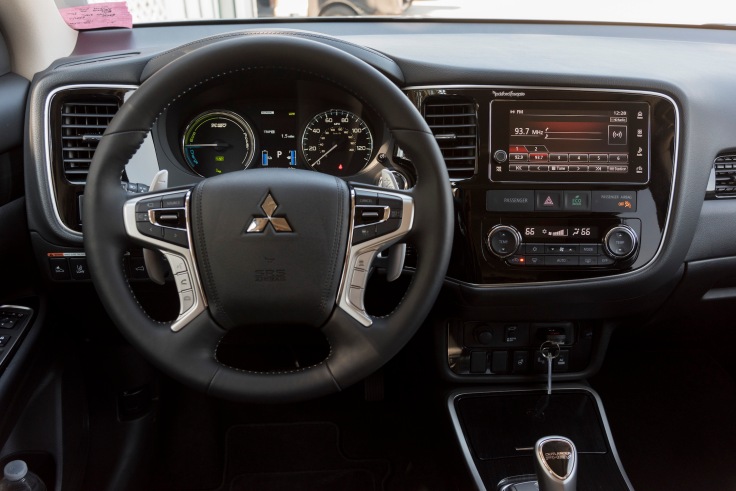 The base price of the tester was $41,190. With a modest list of options, the suggested delivered price came to $42,185. However, it did not include a navigation system. Shortcomings included sun visors that did not slide on their support rods to adequately block sun from the side, and power front seats without lumbar adjustments.

On the road, in addition to the silent running on electricity, the Outlander PHEV exhibited a decent ride and handling for a midsize crossover. The front seats were supportive but a tad hard. Out back, the outboard seats were similar to the fronts. The seat bottoms flipped up to allow the seatbacks to fold flat to expand the cargo area’s 30 cubic feet of space to 78 cubic feet. However, the headrests must be removed to attain maximum space.